Death of a Drive

Today was what is technically known as a very bad fucking day. At first it started off a what I assumed would be a boring day mostly consisting of waiting for a few emails before I proceeded with work on my short. But it fast descended into land of the bad. This was as the drive containing the majority of my models and all but one or two from my short so far died on me. Without going into the techy details so far I've spent since about 10am this morning trying to get any data from that drive or recover it in a number of ways. So far it's all failed.

Now if it turns out the other ways that a few people have recommended to try also do not work I'm up shit creek without a paddle. It will mean that the 3 weeks plus work I've done on my short is all lost apart from a character model I was working on and 1 enviro piece. All back plates and everything else....gone. So cross your fingers as I really would like to make this short the way it must be made to match the version I already have playing in my head.

What if it fails? Does this mean I'll give up on it and move on? Nope. I'll have a rethink certainly and probably have to change things round a bit or even use an alternate story idea of mine so I can keep on track time wise, but give up? Never. But one way or another this year the short I was working on will be made, hopefully somehow I can save the work on it, if not its rethink and adapt.

To those of you who have been trying to help, I'd like to say a massive and very sincere thank you, your help in trying to get that data back is appreciated trust me. What else is new? Well I have been approached by a firm who wish to put a series of my models out for people to buy as figures / physical prints. It's in the early stages and they are on printing out a proof of 2 models as a test right now. Although 'The Dentist' model still remains 'un printable ' in a 3d machine, this time capable of a resolution of 3 microns. (Which should give you an idea of the sort of detail that that model had!) I've always said it's a perfect test model for 3d printing technology as if it can print that...it can print anything. (..and I'm talking about the polygon reduced version put through my app ReDucto.)

Now the loss of a lot of my recent models is a bit of a blow, but it's happened once before and I came back a lot stronger and a better artist as a result. So even shitty stuff has a positive side sometimes. Also a big thanks to the guys at Autodesk for sorting out the problem that had occurred accidently where I was no longer entitled to free software lol. They sorted it out in no time thus saving my bacon yet again software wise. 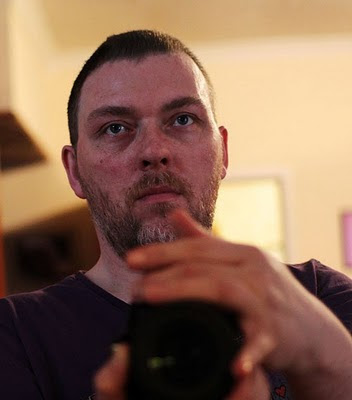 Some of you know I've grown a beard the last month, and yes a large part of it is grey due to my wicked long houred caffine fuled lifestyle, Will I keep it, to be honest I'm not sure, part of me actually likes looking middle aged, but the other part (at the moment safely locked away lol) hates it and wants rid of it. Eventually that part of me will win, or I'll hit my midlife crisis which I'm sort of looking forward to if it means I get to buy motorbikes , wear leathers like when I was 16 and act like a total dick (in comparison to my current behaviour that is lol)

Above is a test back plate from the short I'm working on, there'll be a lot going on in this shot one of about 70 to do. Everything apart from the sky is 3d and will be in 2.35 aspect ratio at720p (so the render farm we've been lent doth not explodeth lol.) This is probably one of the easier shots, and curenty lacks set dressing, grading and final lighting. So call it a previs.

Its definitely goingto be an easier shot so if Rob and myself go 100% CGI. Don't ask as I won't answer any questions, this is a teaser...that's all.