YouTube link for those who cannot view the above

First off no I have not changed apps to zbrush...  But I always test all apps when they release a new version.  I do however use zbrush for things there is no mudbox or 3d coat equivelant for.

Its not often I do a critisism of an entire style of design of 3d modelling.  Its risky and it can piss people off. (but hey what else is new...)  But never being one to stand back from controvesy (and being a moody old bugger who hardly slept last night), I felt this critisism needs to be said.  ...and let the cards fall where they will.

This model from last night (named 'Overkill')  was meant as a heavy handed critisim of the recent plethora of Michael Bay-esque style mech design that I hate with a passion normally reserved for warring nations.     (Now I've nothing against him and I'm sure he's a very nice guy really though lol)  If I had simply put the critisism that follows without a demonstration of me actually doing it, then it would have simply been wrote off as 'oh he's only saying that because he cant do it himself'.  Just because I do not do a style does not mean I cannot...like a lot of artists.

This is not hard to do and requires no artistic ability whatsoever on the half of the artist.   You could teach a monkey to model in this style. Seriously I am not exagerating here.  Its takes no artistic talent whatsoever.  If you put no thought into function, forms and balance of design, then you end up with an abomination like this.    What I hate about is that just banging a shit load of detail onto a model does not make it good.   It is easy to fool the human eye into going 'wow!' just through sheer ammount of detail.

... that however does not make it a good model.

So this model is meant to show :
So while this model may look insane detail wise...it could never move....it has no flow to the design or balance to the detail. It could not function.  So maybe this example will at least make poeple stop and think for a few seconds. This model was never meant to be taken seriously.

Simply covering something in pointless widdles can never replace a properly thought out design that can actually function.


...Thus end-eth the sermon for today.

How it was made:

Everything you see in the video is a default zbrush install of the latest version.  A shit load of mesh insert brushes were useed with parts from just about every single one of the buggers.  Unfortunatley the file /timelapse function in zbrush screwed up on this and corrupted the rest of the workflow, but its basically more of the same.  Then the part I had made was then canibalised into the other parts.  'Simples'.

Now this workflow can of course be used for things with far better designs that this piece of crap.  in fact i do have something in mind at some point soonish (time allowing) that will do exactly this workflow, only in a fashion that would produce a model with good design ethics.

Now while I may hate this style of modelling, its not the first time I've modelled something in a style I personally cant stand.  Part of being a profesional artist is not just making things that you like or think are 'cool', but also to be able to still produce your best when you cannot stand the model or subject matter your working on.

But when producing portfolio pieces, maybe we should all make a vow to try not to just add etail and various nwiddles just so people will have a eye orgasm.  Make it mean something and the detail have both form balance and purpose.

Now I'll keep this model on my site purely so I can then tell what clients have good taste and who has bad taste lol. Thus meaning I can then add a 'artisticly blind' tax to my invoices. :)

Messing Around in Zbrush 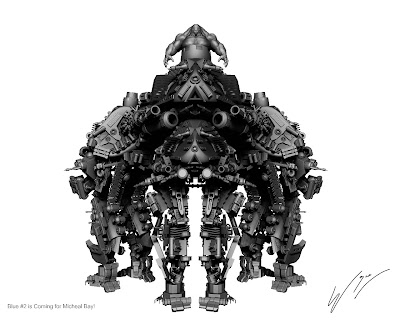 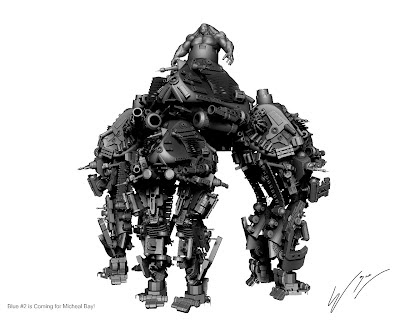 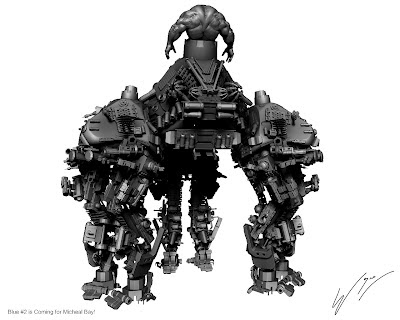 I thought I'd give teh new version of zbrush a proper run out tonight.... so came in with no concept art (I harldy do anyway these days for personal stuff) and my existing zb knowledge.   So this hideous nightmare is my old 'Big Blue siggraph model 'coming to get you Micheal Bay' lol.
Its all default parts as a warm up for an even more 'proper' test and done in about an hour and a quarter. 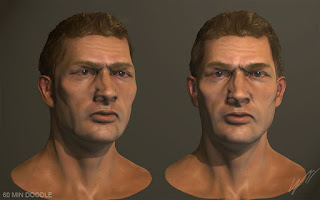 Here's a quick 60 minute practive sculpt.  Yes I still practice and will do until the day I die probably.  The aim for this was to sculpt a head with 1/4 million polys or less.  I also stuck a diffuse, specular and bump maps on it.  I cheated with the eyebrows and did them in post in photoshop, as people without eyebrows look a bit freaky to me, although I did screw the mouth up a bit on this for some odd reason lol.

The reason for the self imposed quarter of a million poly limitis a simple one.  I belive in never wasting a single polygon as they all add up.  The more you can squeze that last bit of detail and form out of a sculpt..the better.  I'vge been doing this poly limited practice routine on and off for over ten years now.

So it's not a serious sculpt, just a doodle done without refs for practice thats all.

Still waiting on olympics stuff, now if I was a betting man I'd say they are going to make us all wait until after the entire olypics is finnished and then pass it out (by then it ceases to be 'news' of course...this may or may not be on purpose ;) )

If your doing some FXPHD courses this term check out the bachground fundementals video week 4 which Mike Seymour uses some of my stuff to explain the ins nand outs of displacement, vector displacement and UV mapping.
Posted by Wayne Robson at 11:45