OK this is the 2nd time I'm putting this up as for some odd reason the entry I made yesterday deleted itself which makes me wonder if I was right putting this blog on such a platform as blogger. Luckily I always type it out in word 1st due to my horendous typos.

So now that the title of my short film is out in the wild "Of Gods & Men" in regards to the End User Event Masterclasses and the breakdown I'm doing on my short I feel I can let a little bit more out of the bag. So I'll let you see 2 still in this blog that are both hopefully vague enough to give you a feel of things without giving away the storyline. 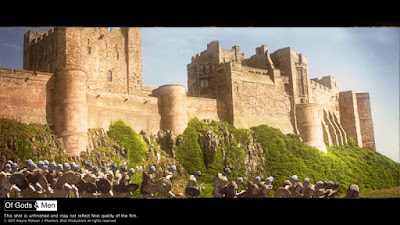 The above is a unfinished shot from the short, now I have purposely kept this as vague as I possibly can as there's a lot about the story very few people know, and some stuff no one knows. I've had this story in my head along with a load of others since I was 17 and I figured it was finally time to start doing what I got into 3D for in the 1st place. This is why I've cancelled all work until after 2nd July and am living on fresh air. This short has been niggling away in my head for 23 years now and along with another few has always coloured the type of models I find myself doing. So the best way to move on from it was to make it, not that that has been easy... in fact at some points it's been nearly impossible.

As you can tell from the still above I'm aiming high in this one and putting everything I know into practice and a fair bit of stuff I didn't. The fact that I have a budget (now all spent) of £25 for the whole short and you can hopefully tell where I'm aiming quality wise for it is the one thing I'm most proud of. So next time you have 20 or 30 quid in your pocket you may think instead of buying a kebab or a new game that you could make a film lol.

There have been a couple of people that have helped out with stuff on the short Some I can tell you what they have been doing , others will have to wait till after release. Rob Angol has been on board since day one and been there as a sounding board for some of the stuff I don't do a lot pipeline wise and as sort of consultant for the render engines I'm using outside of the one I normally use. Apart from Mental ray, as the render farm I've been lent supports them I'm also using Vray and 3delight which is a Renderman compliant render engine. Robs done a bit of everything including some of the many rigs and helping out with the initial concept art. Another person on board for a particular 'thing' is Sascha Herichs that although I would have loved to have done myself I couldn't split myself into two to do so. What I will say is it's an environment piece and that it plays a big part in the short. 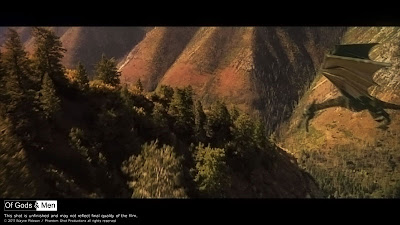 There are a couple of other guys who have offered to help out with the many characters I have to have rigged for this (as I'm probably the slowest rigger and skin guy in the world lol). Once this is done I'll be sure to put a detailed list of who has done what so everyone gets the credit they are due. Of course these guys are all doing bits here and there around their jobs and hoe lives, whereas I'm doing this all day every day and have been pulling 3am and 4am work sessions for a few weeks now.

To get this short done for less than 30 quid has meant some major league thinking around corners and making a few things to help along the way. What this is not is a CGI fest.... the story is king on this as is the shot framing, but that's not to say there aren't hopefully some nice CGI shots to look at.

I've tried hard as I can not to hype this short or mention it any more than I absolutely need to as one thing I've learned in life is that hype is great but it can fast turn around and bite you on the arse. So let's not all get carried away just yet as its entirely possible something goes wrong badly at some point.

Yes I do know there is already a film with this name but trust me your not going to mix this one up with it lol. I did play arund wiht the idea of a title change but as I came up with this title 23 years ago in a night club it seemed such a shame to change it. I would say dont read to much into the title, it means something, though not in the way you may think. ;)
Posted by Wayne Robson at 10:32