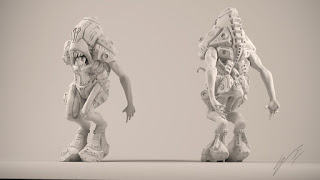 Finally some art today as opposed to just typing about other stuff.   Something I was messing around with today as sort of a practice exercise, the idea was to sculpt al the mech parts from the base mesh with no retop or extractions. (The only parts that are separate meshes are the teeth, tongue and arms....everything else was sculpted from a low res mesh.)

It's a good exercise as people often take a short cut these days, especially if they are using Zbrush and extract the shit out of the base mesh into a load of seperate parts making life so much easier. however, easy is NOT what I want from a practice sculpt... The idea is to make life as uncomfortable as possible.
I've included a quick render and the turntable from Mudbox so you can see how I ran out of ideas once I got below waist level lol.

BTW the upper body rough sillhoutte was taken from a very old Doctor Who monster...if you noticed it was a blatant ripping of the sea devils sillhoute then you get a bonus point. ;)
Posted by Wayne Robson at 16:03

Always one never to give advance notice of when I'm putting things out app or plugin wise, I've just uploaded a tweaked version of ReDucto my poygon reduction app.  The main tweaks are:

I do urge any of you who had problems due to work or home computers having UAC still switched on to reinstall ReDucto.  This should fix those problems through a very unwieldy bit of tweaking from me.  You may still get false positives from norton etc, I've still to find a way to stop these barring kicking the programmers of anti virus software repeatidly about the head and body lol.

Just to clear up a misconception or two that  never  had time to back when I released it. ReDucto is not a mudbox plugin, it is a standalone app.  It was originally packaged together with MudWalker as those would be the main people using it I guessed.  You could say I was wrong as all sort of people and places use it.   So the reason for splitting ReDucto into its own installer was a simple one.... that way its clear that anyone can use this and that you do not need mudbox installed at all.

To learn more about either ReDucto or the MudWalkerX suite go to www.psychocore.com

So I've been going back to that other old hobby of mine, writing and recording my own music, so if your inanely curious or just want to have something to moan about feel free to pop over and have a listen on soundcloud here: