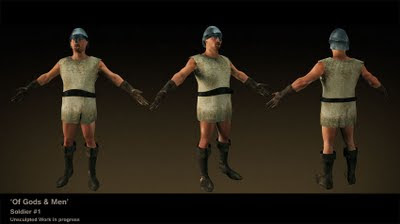 raw poly model for the army of men...I have load of these now lol
Ok so the trailer for Of Gods and men has went live (which I had to bang out in 30 mins after 750 miles of train rides to and from Leamington Spa and back, after a last minute request for a trailer for EUE). After working on this and the many things that have went wrong around my short like a cloud of badness, it's got to the stage where I can almost no longer look at it. After writing brand new aps such as exodus to basically do what massive does..only my way and thus meaning I don't have to fork out a fortune for massive..... and many other things such as an auto skinning plug in for max and Maya (that came too late for the 1st part of my short), I have came to the stage where due to the compromises I've had to make due to every render engine I own dying on me (sticking 3.3 billion polys work of animated skeleton army will do that for any render engine it seems lol) I have been reduced to diffuse only passes from 3delight. 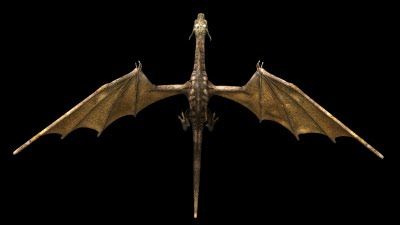 That alone kills me as I know what it'd look like with the right passes to play with in comp instead of having to find a way to hack it together to make it look 'passable'. That was never the aim. The original dragon rig (which is what you see in the trailer) is seriously fucked up...you cannot parent it to a spline path in any way due to the rig being broke (I didn't rig it lol), there was 2 other rigs done by some mates but alas they arrived too late to render that stuff out as it was taking 20 mins a frame without motion blur. Even Breitbilds render farm can't be handed over for free for the length of time it would have taken. 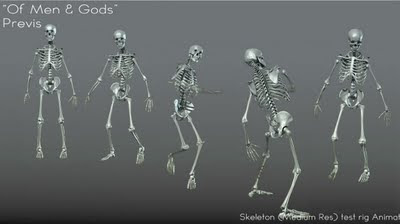 I had every single bug ever recorded pop up in every single app I've used in some cases causing the whole thing to grind to a halt for days and in one occasion a week and a half..... I've had people who swore blind they would help pull out for various reasons which meant it went from 'Wayne makes a nice short with help from a few mates in 4 months' to 'Wayne tries to save his short with zero help in 2 months with broken software.

After months of pulling till 3am and 4am each night 7 days a week I'm as near burnt out on this project as I want to get. To put it very bluntly I'm sick to fucking death ot it and am very close to saying 'fuckit' and doing something else for end user event. 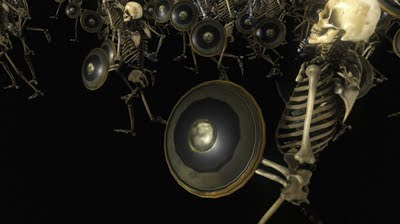 Why? as I know that every problem or issue with that short whether my fault or not, stops with me... I'm not the sort of bloke to go naming names and trying to spread the shit around. So here are a few images that are from the dev of 'of gods and men', some that were lost back when I lost a month's worth of work on it after a drive went bang. They may be more representative of what's went on behind it than the actual trailer or the short itself. 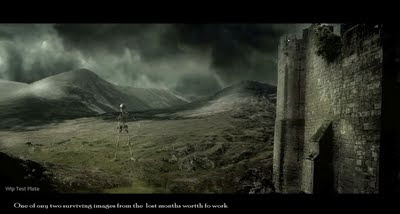 Times ran out, there is no way to make this better at this stage. I have a choice to either suck it up and chalk it down to a bad deal or throw my toys out of the pram and can it completely. The jury's still out as to how adult I'll be over it after months of my life spent on it. Simply put as it stands it doesn't match the vision I've had in my head for 23 years. Maybe I've just been overworking...I dont know.

Exodus alpha version 1 results.....no animtion and no use or more than one model back then...its much differnt now.
Posted by Wayne Robson at 11:29

Email ThisBlogThis!Share to TwitterShare to FacebookShare to Pinterest
Labels: artwork, of gods and men, trailer

I've been a bit quiet of late for a number of reasons. The one that's brought me the most stress and been the hardest to deal with is the making of my short 'Of Gods & Men'. It become obvious a little while back that any hope I had of getting it done by my 2nd day of Lectures at the End User Event in Holland at the end of this month was impossible due to events outside my control. You may think that that was pretty self apparent anyway when you're trying to make a film quality short on a budget of £25, 90% of the time on your own. Had I been able to put the time in I needed , then there was a very good chance it would have been done.

So I made a decision to finish half of it and in the spirit of the last Harry Potter book split it into 2 shorts (that I'll release eventually as a single short.) Hey if it's good enough for holly wood its good enough for me lol. This should have made things far easier, but that's not exactly the case, as I still have 3/4 absolute nightmare shots to finish and render out. It's the rendering that's taking the time as these shots are :

B - as such they can only be rendered on my machine

C - The render farm I've had use of doesn't have a Renderman compliant render engine ,on it which is what HAS to be used for those shots

D - They have raw polygon counts that are between 100million and 750 million (not counting displacement maps...and all of those polys are animated. I'm pretty sure most people don't want me blowing up their render farm

As exodus is only for me, and is a mish mash of all sorts of crazy code from all sorts of places, it's about as stable as an Italian taxi driver behind 2 nuns in a tractor. This doesn't make for an easy workflow and many man hours have disappeared either on development or solving crazy issues. (such as it suddenly deciding to render bright purple using a constant shader and dump all animation ...Just for shits and giggles it seemed lol. Or the time a forgotten floating point interferred with animation on some characters making them all look like they were having spaz attacks.) That doesn't do good things for your stress levels as come what may I have to have this ready for a complete breakdown on my 2nd En User Event lecture.

I've also had in development for myself only a mental ray PTEX enabling shader, and my own propriety 1 click auto rig and skin solution....and a few other things I'll keep to myself. But alas these items mentioned simply were nowhere near ready for use in even a personal short as stability needs to be worked on. My idea behind developing them is mainly so I can have apps that do what very expensive ones do without having to resort to piracy. Which I cannot and will not condone.

This way I have no license fees to pay, I don't have to wait ages for support emails as I can fix it myself, and if it doesn't do exactly what I need it to I can simply research and add the feature myself. Another reason I won't be putting them out for sale or for free is twofold. Firstly, as not only are there other apps that do these jobs nearly as well (or in some cases better), but also its a mash up of various source code and legally it'd mean I'd make buttons anyway. Secondly I want a set of tools to do certain jobs easily that no one else has to give me an edge in production. I don't want to give my best tools to everyone. Harsh but honest.

Thankfully although I am convinced that this short is cursed due to the sheer amount of things that have went wrong, sometimes nice things pop up that help in some way. So I was surprised today to have a message on twitter from one of the guys working for Pixar on the Renderman side offering a free 1 month license so I could get my short finished (or the 1st part anyway)..Hopefully once that's up and running I won't be reduced to the single core frame at a time crap that I am having to put up with from 3delights free version lol. As I can then use 2 machines and all my cores to render it should...in theory mean I can get the 1st part of my short done.

Of course there are still only 24 hours in the day so let's have a little list of what's left to do before EUE on the 30th June / 1st July.

That's a list of the top of my head and I KNOW I have left stuff out. Once EUE 2011 is over with I will then have to try and finish of rendering the complex scenes that will be left for the 2nd part of my short before the Renderman license runs out. A big thanks to the guys at Pixar for the helping hand with the free Renderman for a month.

There can't be many times a blokes CGI short is bailed out by Pixar lol. If by some miracle I have time free I'll put an unreleased shot or two up from my short nearer the time.