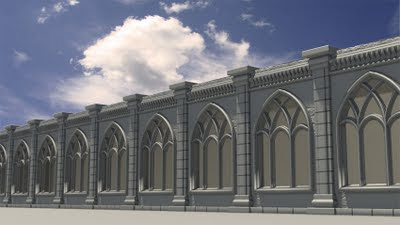 Hour and a bit dick around in 3dmax


So.... as well as having my dad in hospital, who has now had his triple bypass and so far is doing very well ( big thanks to all those who sent their good wishes) and the FXPHD Durham cathedral interior I've also had time for some dick arounds. Either for use in some cases as set dressing that I'd not be able to cover as part of the course, or in the case of the one from tonight just as some relaxation for an hour or so in 3Dsmax. I have suddenly of late had an urge to do more environment modelling, and not just because of the FXPHD course I'm teaching, but because I find it amazingly relaxing and far less pressuring than creatures or people. Mainly as with a enviro model you either get it right or wrong. 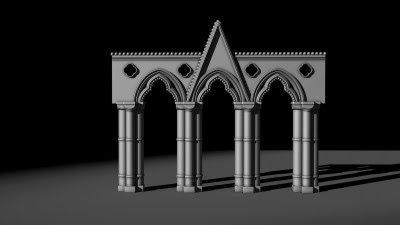 Work in progress of altar screen

Another reason is it gets me out of sculpting everything and forces me to take a break from that for a short time(which always ends up producing better work in the long run). I do find poly modelling environments easy and so low stress, it's not usually something you want to do at 600 miles an hour and so I can stop, have a coffee, take the kids to the park or whatever and come back later. I don't have to 'catch the idea' before it fades in my head.

I also want to point out that this week is your last chance to join the current term at FXPHD, there are a LOT of amazing courses on offer...and mine lol. I know it can be a lot of money, but if you added up all the hours upon hours of tuition and availability to the tutors you get its a steal. (it'd cost a shit load more if it was DVD's for example! ) So far everyone on my course has had nothing but good things to say about it, which is always a plus point. So if you are serious about making this industry your career it's a very good option to consider. 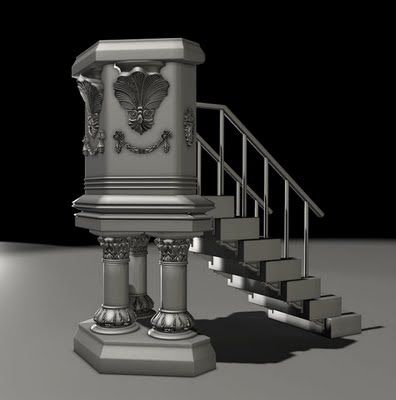 I finally got a replacement for my stolen 550D back when I was at end user event (or more correctly on my way to end user event). After thinking long and hard I had narrowed it between a 60D, a &D, and a Lumix GH2. As theres not adapter for EOS lenses that works the way I wanted them to that doesn;t cost a small fortune I went for the 60D. The only reason I didn't got for the 7D was simply as it weighs a lot more. as I don't drive and hate carrying the weight of a small dead body around I went for the 60D. Why not the 5D mk2? Wel as its overdue the mk3 coming out it'd be folly to spend that much on a camera that could be outdated very fast. Plus there is a rash of other good cameras (inc the sony full frame one) due out very soon so I didn't really feel like taking a gamble.

As I'm not a fan of pixel peeping and chances of aything of mine ever being on a large projected screen are so close to zero that its thinking of it as zero it wasn't an issue to me. Although having the ability to do some good still was. I rarely use auto focus, or auto anything to be honest as it makes me feellike I know what the hell I'm doing. (Whether that be the actual case or not lol).

My dad has his triple bypass tomorrow morning so hopefully you'll all keep your fingers crossed. Its not as straight forward as it could be due to some existing health issues. Right now I'm trying not to think about it as I'd be a nervious wreck. 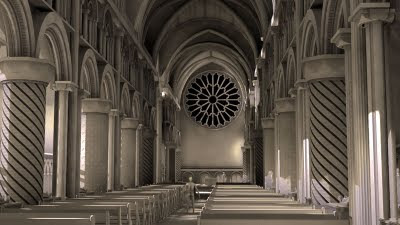 I did a bit of a dick around with the Durham cathedral model I'm doing for my FXPHD course I'm teaching this year, nothing major just basically to unwind, but for those interested you can see it above. Its a fair bit down the actual cathedral this time as I was getting sick of rendering long shots lol I still have the entire altar area to design as well yet.