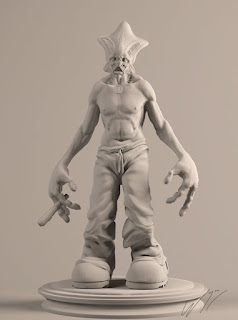 ...yes you can click this image to make it bigger

Sort of an extended doodle that I've had in my head for a while but not had time to sculpt with sorting everything out for the ReDucxto and MudWalkerX releases.  I sort of see this one as a design rough that I could refine at a later date if I have the time and inclination.  The head you may remember is from a speed scupt a while back that I wanted to extend to this full figure piece.

OK I'm going to need a few beta testers as I'm halfway through an update that will remove the need to deactivate UAC on windows to get ReDucto from working for some people.  As there has been a few studios interested in using it  / testing to out and of course the last thing they want to be doing is disabling UAC & antivirus just for ReDucto I'm half way through an updated version to touch wood solve this.

Here the criteria I need:

1 - you must have a machine that has UAC enabled
2 - Have had UAC related issues with the ReDucto or MudWalker release
3 - You are running an anti virus as also going to try and crack the false positive thing as well.
if you want to test the update drop me an email at wayne@dashdotslash.net with "ReDucto Beta" in the subject line.

Also I'll be be starting working on posting both MudWalkerX and Reducto to linux in the next few days or so feel free if you want to beta test the linux versoin of either. ...and dont worry both will remain free.
Posted by Wayne Robson at 15:05

MudWalkerX   ReDucto have both been made available for download and use free at the above link.  There are also some video help files on the site as well, although you are STRONGLY encouraged to read the help files as not everything is covered in the videos.

as well as what was in the promo video I have added some extra little features you were not expecting:

Some extras you get as well:

All made available for free on the stipulation that I do not get any emails for tech support / requests for features / complaints you got abducted by aliens due to MudWalker or ReDucto. If you are a company please send me a courtesy email notifying you are using either ReDucto or MudWalkerX.  It will cost you nothing.

As many people requested it I had added a donate button on the psychocore.com site for those that want to, but there is no obligation to.
Enjoy