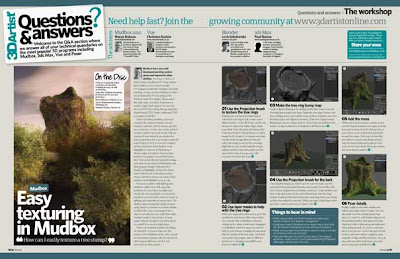 For those of you that may be interested there's an article in the new issue of 3D artist magazine I wrote (there's another next month as well). This month covers 'easy texturing in Mudbox' of a tree stump. You can buy it from www.3dartistonline.com or 'all good book stores' as they always say on the adverts. 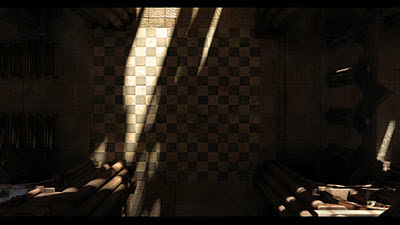 A test frame from MY version of the cathedral animation

I'm also at the moment sorting out a couple of full 3d mattes / scenes for the Joan of Arc short being made by FXPHD as part of my MOD302 course. One of these is an absolute doozy of a shot, that will mix both practical effects and digital 3d mattes. In fact I have a timing shot with low res geo rendering out as I type this.

Also the lads over at Breitbild VFX in Germany are kindly letting me use their ender farm in between using it themselves to render out a load of stuff. So as well as some stuff you've not seen, there will also be my own personal version of the cathedral shots (with a few of my own added), some photoreal full 3 external environments and a bit of character stuff as well.

I've also been giving the cathedral a few tweaks as it was finished back at the end of September last year and so wanted to give everything a once over before adding it to a reel as even though the animation hasn't been seen yet, it's an old model ironically. So there are changes I've made to my own personal version that are different to the one covered in MOD301.

In case you hadn't guessed this is for a new reel, mainly as my non environment reel is seriously showing its age now after a year. It also gives me an excuse to show clients some more impressive stuff in actual shots. Now there is no way in hell I would be able to render this stuff out without a render farm...and even then some are having to be seriously optimised to not blow up the Breitbild VFX farm lol. So big thanks to the lads.

Also I'm amazed at the reaction to the free videos... I hope you found them useful and I'll up more once things calm down in a week or two.