So Wayne..how do you come up with all these sculpt ideas?

That's probably the question I've been asked most over the years. I've heard it said many times that doing monsters and concept sculpts is 'easy'. But people often find that if you sculpt enough you start to run out of ideas or repeat yourself a lot. I've sculpted thousands upon thousands of concept sculpts and speed sculpts ad very rarely repeated myself. So how do I keep coming up with the ideas? Well these ideas I'll be outlining in this and other blog posts aren't new for the most part an many have been done in 3D and 2D before. but it amazes me how many people don't know about them. I figured it was time to change that.

So here's a couple of videos that'll be far more helpful if I explain what the heck your seeing.

Using a random picture of clouds

Pareidolia is something I've found very useful over the years and the best thing is I can tell you what it is and how and why it works but as each person is unique, chances are you'll always end up with something that looks different. The chances that you have exactly the same brain as me or any other person are very very slim. This makes it powerful.

The best way to explain Pareidolia is the way you can look at clouds or random shapes and 'see' shapes that make sense within them. Our brains are hard coded to recognise faces and patterns so if there is a often random arrangement it tries to make sense of it and often you see a face (for example the 'face on mars' is nothing more than pareidolia).

I use this either with 2D art or images (or sometimes even in real life) to 'see' shapes that I later sculpt. I also sometime use it on an existing sculpt of mine by turning it upside down and then seeing what shapes and forms pop out at me that I then develop into something. It also works well along side the next tip and I consider them 'twins' that work very well together.

Now the brain is like any muscle in your body if you keep exercising it you'll find you get better at seeing different shapes to other people see. In my opinion some of the best 2D concept artists work in exactly the same way. I can promise it'll always be a source of new ideas.

This is something I've developed over the years as making something truly random is actually harder than you think as the brains ability and need to have order in chaos and see 'patterns' can have you ending up with a not so random shape. I've recently added to this using the technique my son came up with that allows me to have a truly random starting shape. The trick is to have a shape you wouldn't normally use as your starting base shape but not so odd that it would be impossible to sculpt anything meaningful with. In the video shown here I start 'gently' by doing some random pulls on a sphere (which I find works best for me, but feel free to adapt that if you want). I then see if I can see a shape in it....

Sometimes you hit lucky as I did with the 1st sculpt of 5 I did in 70 mins and it looked to me like a sort of weird elephant guy. So that's the direction I headed in. Now my tip is not to go nuts on details like fine wrinkles and skin pores. Why? because to be blunt you could end up polishing a turd. If something looks good without the fine details it sure as hell will look just as good (if not better) once you do a proper sculpt of it with all the details and textures.

However...... if it's a weak idea then no amount of polishing is gonna make that turd smell sweet. So what you do then is to move onto the next sculpt. Never get too attached to your designs when concepting, they are disposable and treat them as such or you can paint yourself into a corner figuratively speaking.

The 2nd sculpt is a far more standard shape which I immediately saw as a sort of bird guy. As for the 3rd sculpt, well you remember above I mentioned sometimes you hit on with a nice shape straight away? well other times you don't as in this case. So this one I skipped through fairly quickly as I knew chances are it'd not end up as a design that I would ever be using. now this isn't to say that you or anyone else can't see a really fantastic idea in it..that's what makes the ways of concepting so powerful they work differently for everyone.

Number 4 & 5 work together as sort of a 'ideas set' as I think of them. I start with puling a shape and adding a neck and lower jaw to it, then once I am done with that sculpt I then remesh it to a low poly level (about 68 on Dynamesh in this case as I was using Zbrush for this..mainly as it makes it far easier to explain and how). Then I moved onto using random meshes added to it as explained in the workflow my son came up with a few blog posts back. in the case of this one I 'saw' initially a weird Japanese geisha, but didn't want to do another cartoony one after that damn star shaped thingy, so looked a little longer and saw a character from my daughters favourite TV show. (The TV show is 'ZingZillas and the character is 'Tod' by the way). So the damn show has nearly drove me nuts I took the 'tod ' character and did sort of a slightly evil twist on it.

Now I finished on this one (even though its technically a existing character), because it illustrates another problem you can come across from time to time, where you do a random shape and cannot get past seeing a well known character in it. in this case I saw another one after the geisha but before the 'Tod' character. As it was so well known a monster / creature it meant I had to have an 'exit strategy' so I could continue concepting and not simply get walled into a series of existing shapes from a character that's already around. IN my case all I could see was the damn predator lol. So a large comedy monkey janitor from a kids' TV show was preferable in my case as there was more 'wiggle room' for creating either something new or an acceptable alternate version.

Now what I haven't mentioned is the steps I take mentally (simplified a bit) but often it is just a matter of taking your shape, seeing something there and then wrapping /warping human or animal anatomy around that shape. It sounds simple and to be totally frank it is, it just takes a bit of practice.

Now I have many more ways I've collected and came up with over the years and I'll share more of them as I have both the time and inclination to. But for the love of all that's holy don't get caught up on the 'how's of sculpting when learning these techniques, leave those for other sessions and simply enjoy coming up with designs you can later use. Technique and anatomical knowledge is important but its best kept for separate practice sessions, especially if your just starting out. I often twist and warp anatomy to see how far I can take it before it 'breaks' and cases to make sense. But to do that you have to have that knowledge as a starting point.

So there you go, I'm not in the habit of teaching people 'how to think' but in this case I feel it's a rewarding enough way for some of you to do lol. I'll cover another few ways as I have time etc....

Here's a couple of doodles form yesterdauy (Tuesday) The 1st one is unfinished and a Zbrush one and I have no idea what it'd have turned out to be as I was completely freestyling it. The 2nd was done in mudbox and still freestyling but turned out a better design. 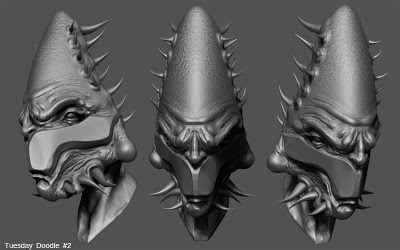 
Nothing so far today as been having a lazy 'can't be bothered' day.
Posted by Wayne Robson at 09:05

As a side note I'd like to say a thankyou for the goodwishes and emails I recieved after the last blog post. Apart from a mention on my video blog on youtube I'll not be banging on about it any further. 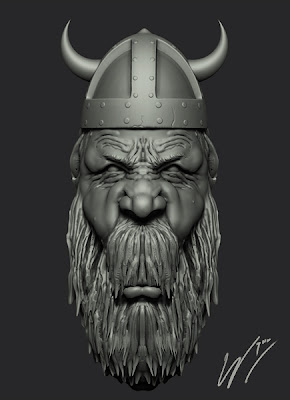 A couple of doodles from last night or two. Tonights went awol due to a crash, so as recompence here's a few turntables.... 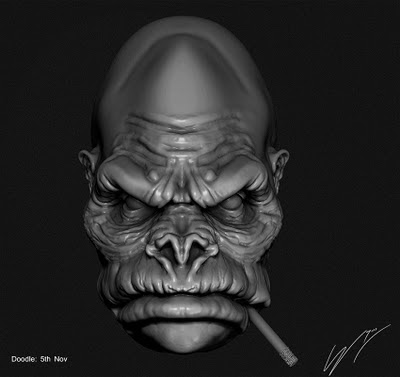