..and a turntable of the cross I did shown in the last post. Oh and you may want to head over to www.FilterFoundry.com as theres another shed load of hours of videos of mine up now brining it up to about 8 hours of in depth mudbox tutorials for total beginners. You have to join (for free) but hey your getting the equiv of 1-2 dvd's worth of tuts for nothing! These videos effectivly replace my Wave 1 DVD (as filter foundry paid me enough to make sure that they could be put them out for free for you).
Posted by Wayne Robson at 12:38 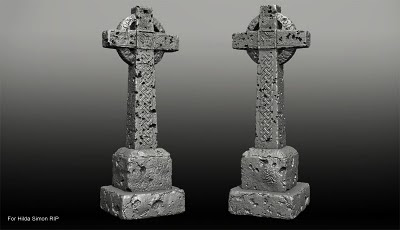 A good friend of my family died last week that I'd known since I was a small child, while its a very sad story I'll hold off on the details out of respect for everyone who is still greiving. Suffice it to say that Hilda helped me when my life was at its lowest back when I was homeless and was a really amazing woman. She was in her 80's when she died, but she probably had more vitality than most 16 year olds!

As she was cremated today and wouldn't be getting a headstone , I thought I'd make her a virtual one as I'm a big beliver that you give back to people with what skills you have. 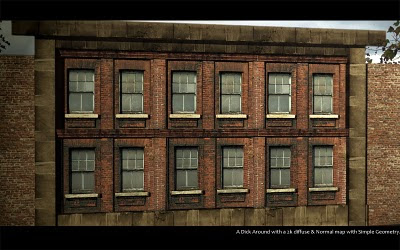 est to upload lol, I must start them away once this is done), and I trust your enjoying them. I have been asked to do some more so I'll definately try to when I have time, a bit more advanced this time, and maybe on software other than mudbox and othe than sculpting software for a change.

Also I had a quick mess around with a single 2k diffuse and normal map for a building parts kit (to stick in my models folder and be used to create anyone of a number of buildings and to be dragged out when needed), ignore the more obvious problems as this was only a way to warm up and fill an hour or two. The 'Mad in the Med' TV series starring Danny John-Jules that I've been working on the CGI for has been put back a month, so I'll give you a heads up on that one when the time comes. ( There's a full animated lion in there myself and Rob Angol who I brought in to handle the body rig did. I aslo recommended Sparkle media to handle the editing on the series.)

So next up will be a TV series that's already started on Sky that I can't name until just before the episode I worked on airs. If you have kept an eye on new TV series though you may have narrowed down the list a bit lol. This is something gory and photoreal I did.

As I type I'm just comping an anaimtion 'for me' with an old-ish model and its looking pretty nice so far.
Posted by Wayne Robson at 15:19