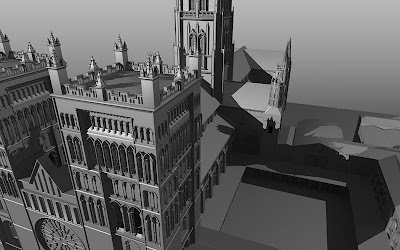 Trust me there is a LOT of detail behind those shadows!

After what feels like 6 life times (in truth less than 1 1/2 weeks) I'm finally calling the modelling stage of the Durham Cathedral complex for my FXPHD class MOD302 done. I feel like I know this cathedral better than the people who bloody built it afer starring at it for a week and a half lol 18 hrs a day. 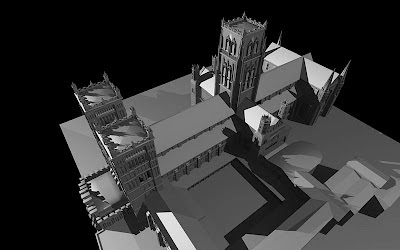 So many areas are detailed I can't get them all into a single still
Now this was not just a modelling 'challenge' for me (it being without doubt the most complex model I've ever done...especaily if you count the interior I did last year for MOD302), but also a software one. in the end I had to use 3d max 2012 for this for one simple reason...it was the only software with any chance of being able to have the ammount of polygons in the viewport at the sametime without crashing like a bitch all over the place. 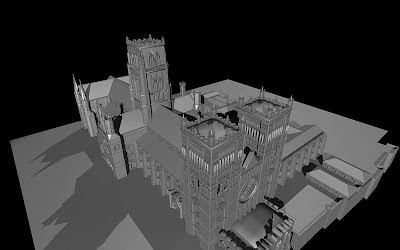 Its gives me migraine just thinking about ever doing this again LOL
We're talking tens of thousands of seperate parts and a polycount that technically should 'break' 3d max, its viewport ....as 3d max has a theoretical poly limit of 10 million for a single scene (without proxies etc). This model breaks that by a fair old bit. In fact its between 12-15 million..with no instances or proxies used. There is detail thats not visible even in a 1080p frame lol. (in fact even trhe sanctuary knocker is modelled even though it takes up about 3 pixels.) So every part of the cathedral complex is capable of supporting a close up.

Now I MUST give props to Neil Hazzard and the nitrous team who handle the 3d max viewport progamming. Any other app would have not only crashed but certainly not have such a nice viewport as respresentative of the final render. In fact below at the bottom is the viewport grab of the scene to compare with the 1st image in this post. Not bloody far away I think you'll agree! 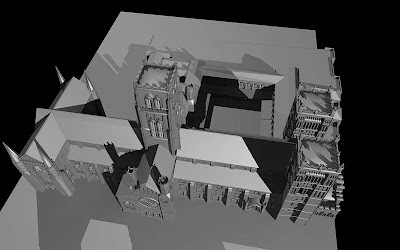 The model will stand up to a close up on any tiny part of the entire complex.
So lets remember that when 3d tech works well...god damn its impressive...and this does. So hats off to Neil and his crew. (I promise to buy him several drinks next time I see him.)

Now comes the hard part...texturing the entire cathedral complex ,setting shaders up and getting it ready to create the entire 3d scene it will go in. But 1st I'm taking a damn day off as a week and a half 18 hours a day working on this has me on the verge of running round with an axe. 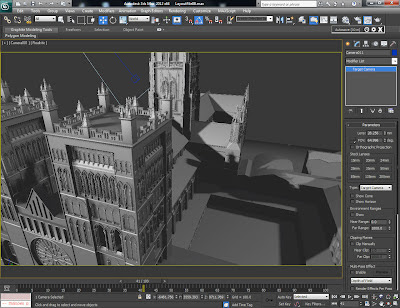 insane polycount in the viewport of 3d max....
Posted by Wayne Robson at 16:45