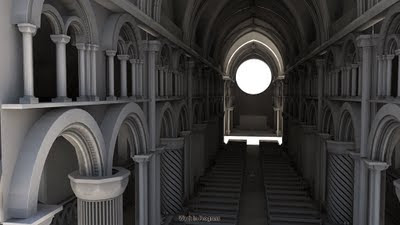 Modelling nearly done for nave, both wings and the modified altar area (as required by Mike Seymour who is art director for this), few more bits and pieces then its onto uv mapping, texturing and sculpting this. A very short blog entry today as my dad is in hospital for an emergancy heart operation so funnily enough blog posts aren't top of my adgenda today.
Posted by Wayne Robson at 02:42 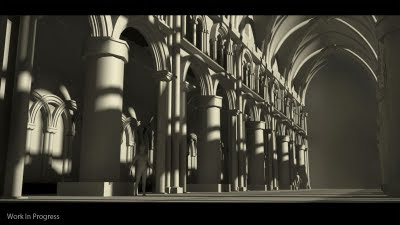 Here's a quick update to the Durham cathedral interior model that I'm covering the creation of for the FXPHD advanced interior modelling class I'm giving. This is the low res 'B' version that I'm working on in tandem. The idea behind a alternate version is that I am a bit freer to tweak things for the shot if need be.

This is the Nave only and accounts for only about 1/4 of the final model and the 'low res' is currently at 1.7 million in my 'B' version shown here. (There will also be a far higher res 'C' version if I can get it all to render lol.) This is all pre sculpting and lights at the moment are a simple stand in. Remember folks this is a work in progress (i.e. unfinished) and subject to some rather dramatic changes.


Also I have just stuck my PROSKAR anamorphic lens, complete with clamps and doipters up on ebay as I don't have a dslr at this time. This lens is a great example of the PROSKAR anamorphic lens and if your into dslr filming I strongly recommend looking at it (although I would say that woudn't I? lol). It also means you'll be able to get nearly a 4k wide image out of you DSLR ;)
It breaks my heart to have to sell it.