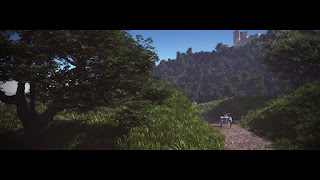 I normally leave people wondering what I'm going to do for my lectures, often I just give the vaguest of hints in advance.  I'm breaking it this time   I'm going to recreate this image from the top down on 60 mins from start to end.

I'll be doing it for my lecture at Anomaly on Saturday 28th April in Vancouver. My mateDanny John Jules has give me permission to use the bike model I made for his upcoming  film 'Bucky'. The model fitted the scene perfectly and added a somewhat dark overtone to a otherwise cheerful scene.   (The image is entitled 'Missing'.... )

This is my 'rough' version to tweak placements / ideas etc.   After my lecture I'll be sculpting and demoing from 6pm till just before midnight.  So for those going I'll see you there.
Posted by Wayne Robson at 15:21

Its time for some Anomaly pimpage as I promised them I would. :) 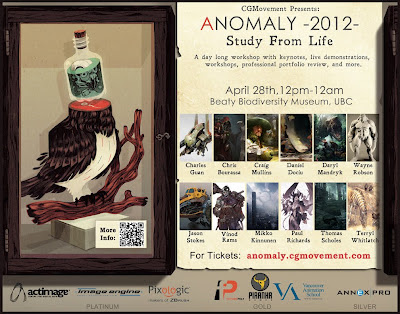 I'll be at Anomaly in Vancouver on the Sat 28th April (next weekend to you and me). The other artists lecturing are easily worth the price of admission on their own....each. So if you in the Vancouver area it's well worth a pop over. I'll be lecturing on 3D digital environment stuff and then doing a 6 hour demo afterwards on the main floor (....that's gonna be interesting to do as not exactly a quiet environment to work in.) I'll be in Vancouver between the 26th and 30th so there for a few days should any peeps I know what to catch up.

If you're a 2D person then you'll be in heaven, if you're a 3d guys as well then it'll be bliss. I'm going to try and make a couple of the lectures by some of the others myself. That's if I can fit them in around the 6 hour of demos I'm doing , the inevitable jetlag and providing the rooms aren't full of paying people (as once the tickets are sold...that's it no more.)

I'm not even going to try and give you a big sell about what each person does as chances are you already know...and if you don't know then it's about time you learned about them;)

Jon Schindehette (Wizards of the coast) 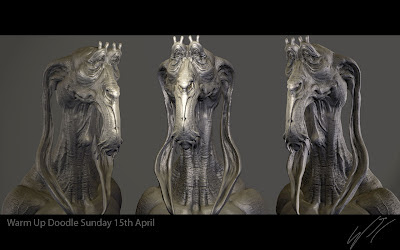 Sargent Tarkels...not many people sculpt him now do they? lol
I do all sorts of sculpts just for me that never ever see the light of day. I suppose in this case it could be classfied as 'fan art' sort of loosely as its based on the concept sketch for Sargent Tarkels...the 'other' gungan in episode one of star wars. As Terryl Whitlach is also a lecturer at Anomaly in a couple of weeks time in Vancouver, so when I saw her post the concept for this on her facebook page, it seemed the ideal thing to do as a warm up sculpt.

I have changed a few minor things here and there, I played around with the idea that the older a gungan got the longer and more droopy his snout would get....why...well why not? Plus its not as if everyone and his dog has done a version of this unlike just about every other star wars creature lol.

Now normally I dont post stuff based on other artists work or thing from films / comics I may sculpt as wamr ups because as a rule I try to make sure to ask for permission and suddenly then it gets all serious and stops being a fun warm up sculpt. (Thus negating the whole idea of a fun warm up)

If you want to find out or details of the line up of lectures for Anomaly 2012 then visit the link below. I'll be doing a 1 hour lecture and demo on a certain type of photoreal environment and then a 6 hour demo on the creature / sculpting side the same day. (Where you can come and have a chat, ask questions, tell me how much you hate my accent etc...although all assasinations attepts must be from 11-11.30pm only I am told LOL :) )