Guardian of the Rings 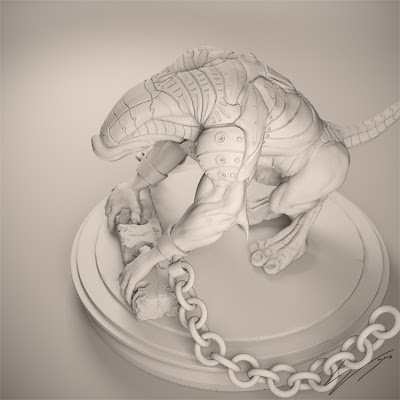 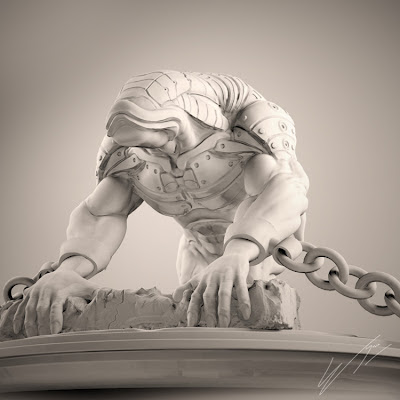 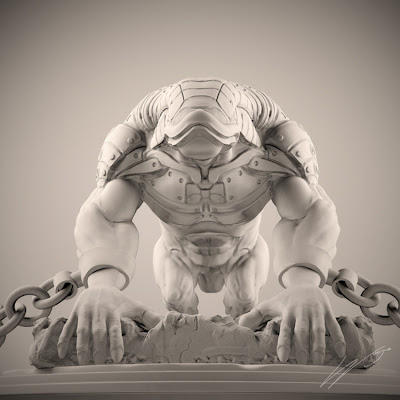 Here's a little something I've been noodling about with last night and this afternoon. Not incredibly serious sculpt and wish I'd had more time to fix the arms and complete the claws, but alas it'd need a total retop to take futher. As usual created using Mudbox and 3dmax 2013 and renderd in mental ray.

Camera update: memory card if defnalty totally screwed, and cant test camera until I buy a new one tomorrow, so keep those fingers crossed.
Posted by Wayne Robson at 10:08 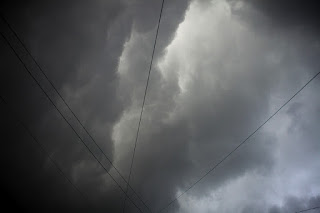 I normally don't put photography stuff on my blog, but as this is such an interesting story and also a cautionary tale I felt just this once I was allowed.   Just after dinner this evening we had a massive storm right over our house.  Now as I'd just got delivery of my 5D Mk2 about 3 days beforehand I thought this would be the perfect chance to use it (I've been too busy with work the rest of the time).

So off I went outside with my wife and daughter (who had never seen a storm or lightning before) and started filming and taking photos.  I didn't think too much about it, even when a massive crack of lightning happened and my camera flickered like I had just shorted out the battery or something.  I kept filming and caught some amazing footage of a lighting storm about as close as you ever want to get. 3 inches of rain fell in a little over a minute and a half.  The worst storm I've seem here since the Epic consett lightning storm of 1995 that fried electrics over a 2 mile radius. (anyone local around at the time remembers it well!)

So after it had passed I rushed to my computer to download everything...only to find that the storm had screwed up my brand new Scandisk memory card (that cost £90 as it washigh speed and intended for video).  I got a handful of photos off it but the camera and the card kept giving errors.  Finally I stuck the card directly into the slot in my main PC and started a recovery process...followed by recovering corrupt unfinished MOV files.


The video above shows what I could recover from the storm footage up to the moment it all went 'pair shaped guv'.

Now I have to admit being scared shitless of testing my camera again in case it screwed that up as well. It took me a fair old while to round up the money to spare that I could spend on it (as my rule is only money I make selling stuff or paid directly into ebay gets used for my camera stuff.)

So I am putting off testing the 5D at the moment..that going down only days after I bought it would be to horrible to contemplate. (although par for the course with the epic bad luck I usually have).
Weirdest of all... the storm also shutdown every single mobile phone in our house, all unplugged and fully charged.  I've no idea why...answers on a postcard please.  But anyway here's the video I caught such as it is (with unfortunately the best parts missing with epic sheet and fork lighting.)
Posted by Wayne Robson at 15:05

I'm sitting here just doing the final stuff on the contract I've been working on for a client for a month.  Hopefully sometimes in the next couple of months I'll be able to show and go into detail about what I've been doing and what for.  So now it's back to hunting down freelance gigs and firstly having a bit of 'doodle time' for the next week as this jobs been full on long hours for a month now and it'll be nice to get some time back to 'have a life' again lol.

Yesterday I finally got the 5D Mk2 DSLR I've wanted for 2 years now, so also I'll have a bit of time to play around with that as well.  although its less for 'DSLR film making' and more for project related stuff.  (Although that's not to say I won't be testing out the video features lol).
I'm also REALLY looking forward to saving an archive copy of what I've done and then deleting the other 125gig of incremental saves lol.   So it's back to what passes for normal and enjoying not having to be within phone answering distance stuck at home.

On my list of stuff 'To Do' is to do a Linux compile  / port of MudWalkerX and ReDucto, do some opening titles for a TV Show and try and get around to putting together stuff for my next demo reel, although as usual the biggest problem will be actually rendering it out on a single pc.  It's ironic that more people now have scenes I've came up with as part of the FXPHD classes I've gave in their reels than I do. but still...I've got to smile at that.

So now if you'll excuse me, I have a bit of speed sculpting I want to doodle on with....
Posted by Wayne Robson at 11:47