I felt after spending the time making the cathedral for FXPHD I'd cover some stuff that I was not able to cover as part of my classes as it was not part of the remit, that people may find useful. First up is my mini reviews of some of the software I've used as part of the course to create the thing. I'm going to bypass Mudbox as my opinion is well known and not exactly impartial lol. So in this 'every now and again review' section of the blog let's start with the app used more than any other in making the cathedral.

Now I've used 3dmax as my main 'rendering app' for an age now, although I use all 3 of the big main apps (Maya, Max and Softimage). I'm in a situation where I'm using both max 2011 and max 2012 as 2011 is on my 'dev machine' and 2012 is on the machine I use to record a lot of stuff. There are times when it's easier to use my dev machine as it's in my work room, which is far cosier to work in. Of all the features added to max of late the one that has been the biggest game changer for me is the Nitrous viewport.

Now let's get right out of the way early on that I consider many of the max team as friends including Neil Hazzard responsible for leading the team iwho make the Nitrous viewport. This is not to say that does them any favours in this review...far from it as those guys know that if I think something is crap I will tell them and will also do best to push any tech far beyond sensible bounds.

Viewports normally have a habit of flattering the model and thus makes nice pretty shots for sales images and videos. To me that is as useful as a chocolate tea cosy! I want to see in the viewport a near as possible representation of what I will see at render time. If lighting is off or material are going to make it look shit, I'd like to know before I hit render on a heavy scene thank you very much. 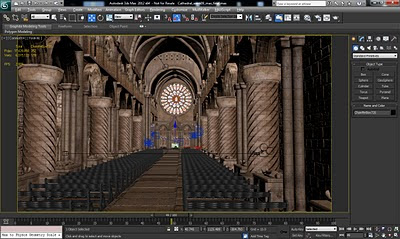 The cathedral in the nitrous viewport in 3Ds Max 2012

The biggest difference from a lighting point of view for me was indeed the nitrous viewport as it doesn't try to make things look better, it shows you how it will be at render time. Or at very least a damn good estimation of it. This may be quite easy in this day and age to turn an apps viewport into something that looks far nicer....however.....what is far harder is also keeping high end performance.

Now if you've looked at the blog posts below you can see that the cathedral is a damn complex scene with a lot of parts and instancing ignored for the most part (as later on I had to create part of the course in Maya for maya users, so instances were best to be avoided in this particular case.) The shot you see here of the cathedral in nitrous was from part way through the progress and has 17million polygons in the scene and a lot of materials and maps. Now I'm fairly sure Neil didn't think anyone would be stupid enough to have a scene with that many non instanced polys in it. So had the viewport broke down in any way it would have been forgivable. But it didn't, it handled it very well indeed.

Yes with that much data being passed around it did take a couple of minutes for the on screen shaders and maps to become all visible, but once they were I could navigate the scene with the same speed I could in max 2011. Where it came in most useful was for lighting, as in previous versions of max it could be a hit and miss affair and sometimes the viewport would seemingly get confused and have a mini nervous breakdown and show something completely different to what it would be like at render time. When I was using 2011 to light the scene it took far longer than with 2012, to me that speaks volumes.

You can tell just by using it that Max 2012 has had a lot of work and improvements put into it, REAL improvements that are useful and not just meant to sell you a new copy of 3d max. I'd strongly recommend it over previous max releases and if you can update, please do as chances are you'll find it a great boon to your productivity. What I would like to see next from nitrous is for it to be kept improving in development and get it closer and closer to the render. Information is power and the more you know what a render will look like before you hit that button the better.

EDIT:I was asked what spec machines and how many textures so here goes:

dell custom laptop
i7 core cpu
12 gig of ram
quadro 4200m (with only dell 2 year old drivers that are crap and make it unabel to do cuda!)
and a Keyboard that you have to hammer very hard to type with lol.

A small selection of the 15-18 shots I've been working on for this. 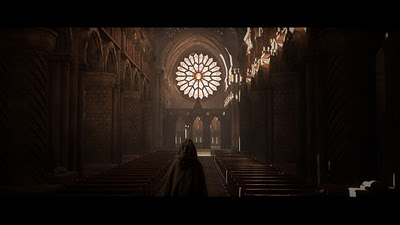 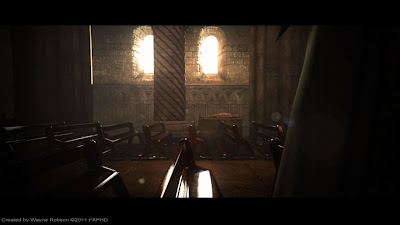 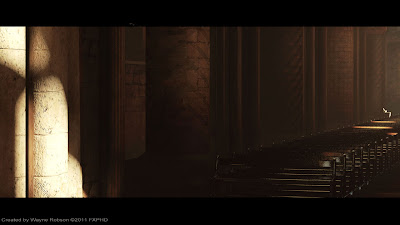 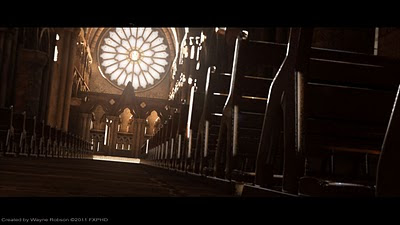 ...all classes for FXPHD class MOD301 recorded and uploaded

Its the most fun I've had in ages and the course has covered 3Dmax, Maya, Mudbox, Zbrush, Mental ray, renderman, enviroment modelling and sculpting, organic modelling (for another shot) and sculpting, texturing, lighting, shader set up, render setup, some tips and tricks and a shit load else.

The references were a lot of spy photos I took like James fucking Bond (as photography is not allowed at all in Durham Cathedral) and a shit load of on site pencil drawings I did. The only parts not put into this from Durham were the 9 altars area and the back altar screen 's lol). One day I may tell about a major event that went on in my life while I was making this that I've not mentioned...that is on top of my dad's emergancy triple bypass.

Which I dont think is too shabby for 10 x 45min weekly course videos. The final animation will look diffferent to this once the proper post and tracking data and live action elements are added. But its a good guide. So now for the 1st time in 6 months I have not a thing on....so after a few days rest its back to hunting down some more freelance gigs.

Its been a pleasure to work on this course with Mike , John and the guys at FXPHD and hopefully the end result comes across with some of the enjoyment I've had doing it. Its also been nice to show I can do more than just monsters and hideous creatures.
Posted by Wayne Robson at 14:50