Warming back up for creatures 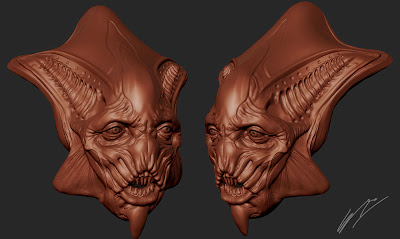 Its been quite a while since I did any creatures, so with the cathedral shots out of the way its time for a bit of playtime and back to a few creatures.... so doing a few warm up sculpts to get back into the groove over the next week or two.
Posted by Wayne Robson at 05:31 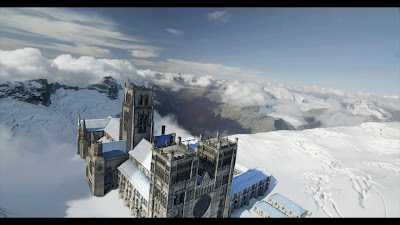 Finally it's done! There's a polycount in the tens of millions and brought not one but 2 PC's to their knees and me to the edge of insanity over the last 2 weeks of it. I've had dying machines to contend with, epic powercuts, both kids at home for 2 months due to crazy stuff by the local education authority who seem to see a simple move of schools as worthy of international debate...but I digress. The bottom line is its done.

Although modelling, texturing, lighting and rendering out the shots for both the Durham cathedral interior from last year and the exterior this year have been fun, I'd a little glad to be able to move onto something organic for a while. The above shot is a style frame from the actual shot done as part of the MOD302 class that's just wound up after 10 weeks spread over 3 months. Things can and do change before final composite although that could take quite a while before I see it. (The stuff from MOD 301 finished last October has only just came into my hands ..and there are still a few shots not rendered out and composited yet.) I'm sort of hoping I'm not the last dude to have it rendered out as be sort of a bitch if the guy who created it does not get to put it on a reel till after everyone else lol.

EDIT: Here's a quick reel of some of the shots I have got a hold of from MOD301 so far.


So no more Norman architecture for a while for Wayney boy! Its been full on 18 hours minimum a day the last few weeks and for most of this year in fact. So in one way its nice to have some more 'me' time and time for the wife and kids.

Its back to organics for a while and prepping for Anomaly in Vancouver for my lecture and demo at the end of this month. I can promise something special as you do not go to what could be called the 3d sculpting capital of the world unprepared ;) Not only is there the lecture but also 6 hours where I'll be demoing and available for questions and practical stuff as well. 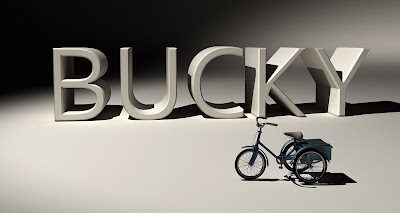 I've not made an antique kids bike before to original specs...groovy.

Also I just did a quick logo for Danny John Jules film 'Bucky'. Very fast turnaround on this pone as a favour to Danny. I'd urge you to donate if you can as I'm probably one of the few people to have even a rough overview of what it's about (Danny has been purposely keeping it very secret). I can say it's going to be damn good.... I normally don't pimp other peoples stuff in my blog, but :

A - I count Danny as a mate

B - Its a very cool idea and story line

C - If I didn't he might get the thumbscrews out again...lol

So here is the LINK

So it's back to organics for me for a while so next week or so I'll be getting back up to speed after a year of mostly environment stuff. Expect monsters, expect creatures as it's been a bloody age since I did any. So no more banging on about the cathedral unless its to show you animated comped shots ;) ...mainly as of right now...my books are empty so back to freelance work searching for me.