The auction of the Robin Williams painting of mine to raise money for the Samaritans is now live for the next 7 days.  So show you have a heart and bid on it.  I fully expect every company I have dealt with to share this as this is an IMPORTANT issue, if you do not then you are showing that you are no friend to the great many who suffer from depression and depression related illnesses.

If everyone can share this as much as possible that'd be great, if it makes you feel more comfortable, even leave out my name...after all its not about me, or you or Robin Williams but for a greater good.

Sorcha Ní Mhaonaigh﻿ has agreed to be the independent 3rd party to ensure that everything remains fair and above board. 100% of the money is going to the Samaritans.

BTW ignore the Buy it Now price as I had to put something and thought 'screw it lets aim high!' (If tracey emin can sell a fucking unmade bed I'm sure a painting of mine has to be worth something. lol)
Posted by Wayne Robson at 08:57

Robin Williams Portrait Timelapse and Charity Auction for the Samaritans 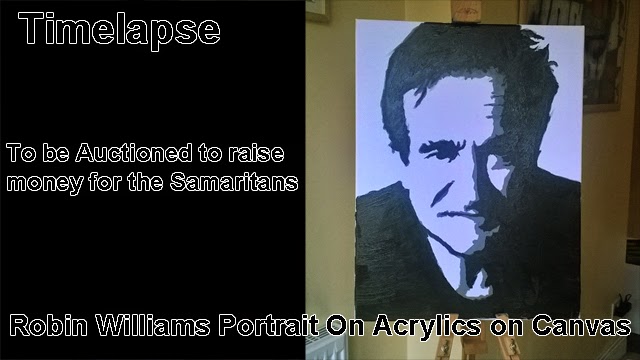 Usually I keep my paintings to myself, it's what I do to unwind so I treat them as personal.  Like many of you I saw the news yesterday when I woke up that Robin Williams had taken his own life.  I can never remember a time when he didn't make me laugh either in film, or an old DVD of his stand up or in TV back in the days of Mork and Mindy. It inspired me to set up my easel and paints and paint him, his face half in shadow and half in the light.  My plan is a simple one, To put this painting up for  auction to raise money for the Samaritans who help people who suffer from depression in their darkest hours.

LINK to the Auction

As someone who has had clinical depression all my life and who is also Bipolar it also hopefully helps to rid the stigma that often accompanies depression. It's not just a case of being 'A bit sad' or someone simply 'pulling themselves together' as those are some of the most offensive things you can say to anyone who suffers from depression or a bipolar disorder.  Many of us who suffer from either or both of these don't have a big sign on our head saying 'Beware!  Nutcase!'

In fact speaking for myself (as I know me best lol) most people I know aren't aware of it unless I choose to tell them.  (I don't see why I would need to make a massive big deal out of it.  For me my art gives me an outlet.)  It's not linked to any one thing in my or many other cases, it's just the way we are, and its certainly not  'a lifestyle choice'.  We still can do our jobs just as well as anyone else, we don't go round crying  or threatening to top ourselves all the time.  There are some serious misconceptions about the whole thing that need busting.

So it's no surprise that Robin Williams like a great many others who suffer from depression find a way to cope via a rather sturdy mask we put up.  Its often far easier to put up  a mask than have people see your massive up and downs.  Winston Churchill he called his 'black dog', a great many creative people have depression related problems of varying degrees.  We don't want your sympathy, we don't need it, but removing the stigma , yeah that'd be nice.

So having a organisation like the Samaritans that people can call when they feel like they want to end it all is vitally important.  You never know if or when you may be affected by depression, so its probably a good idea to make sure they have enough money to stay around.  One day either you or I might need to call them.  I hope that in some small way the money this painting raises in auction helps to make sure that they are still there should any of us need them.

If you or someone you know is suffering from depression then you will know that its usually not one event that 'causes' things... it's more a case of a dripping tap into a glass...one day there is simply one drop too many for the glass to hold anymore and it overflows.  While I've never been so far down that I felt like suicide, I'd like to think that should I ever end up that low, that an organisation such as the Samaritans is there to help.

So put your hand in your pocket and bid on the painting, not for the painting itself, but rather for what it stands for, and to help others in the process.  I'll be putting it up on eBay some point over the weekend starting Friday 15th August and I do not expect this to become a Max vs Maya issue, or a Mudbox v's Zbrush v's 3Dcoat issues etc...as MANY artists suffer from depression and a great many never mention it for fear they will lose their jobs.  This isn't about me...or even Robin Williams...it's about supporting a cause that can affect any single one of us at any time in our lives.  So really its les about buying a painting...its more about showing that you have a heart.  So show your support and pass the word around.

PS to make sure there is no chance of allegations of improtriety on my part I intend to put a third party in charge of the money that the auction raises and hand it to the Samartans charity on behalf of the digital art industy
Posted by Wayne Robson at 11:28