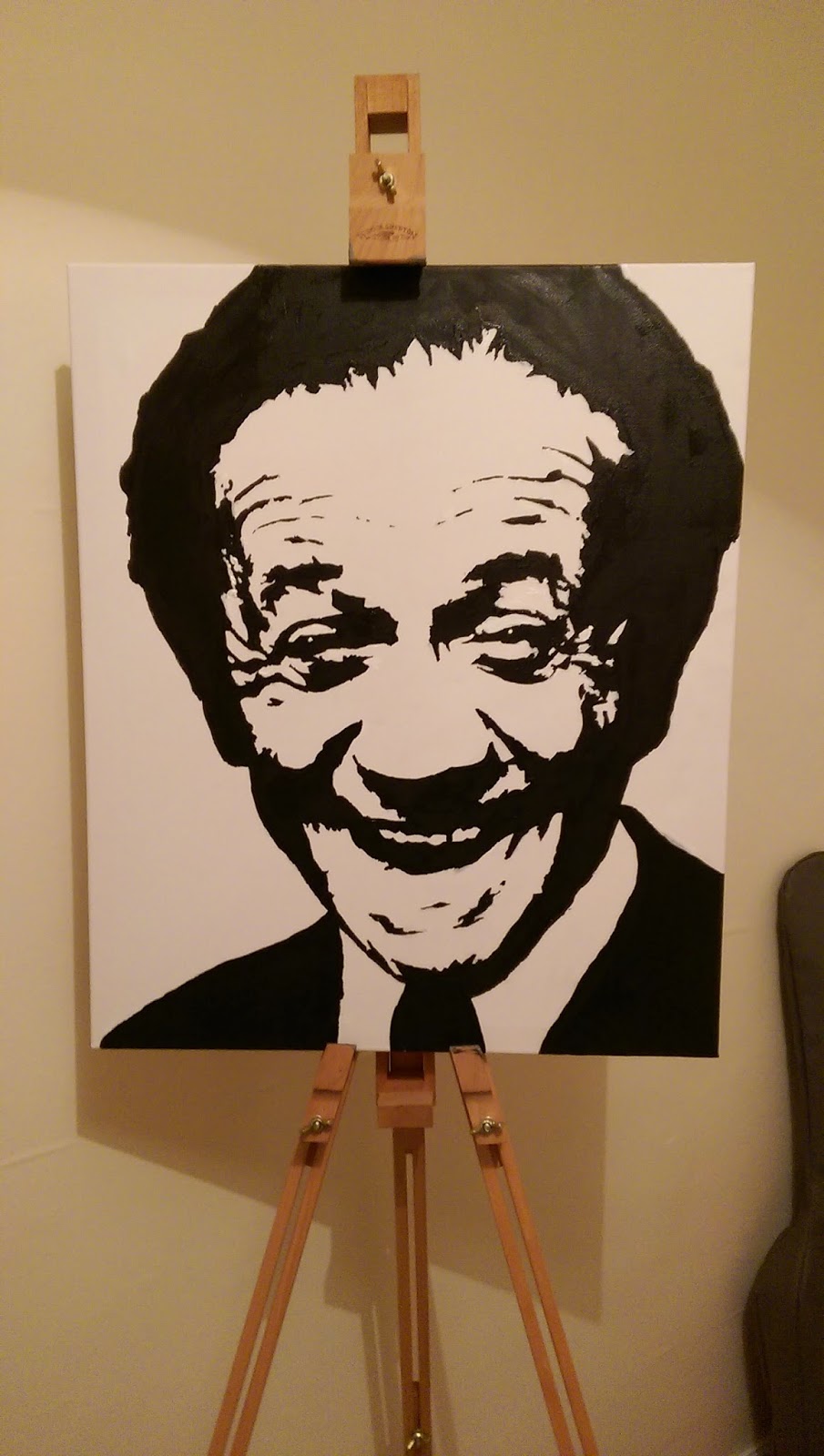 As a kid the actor Sid James was a total hero to me.  Something about the characters he played just made me think he was awesome.  While he's best known as an actor in many carry on films and Hancocks Half hour, he did a whole lot more and had a long and varied career before his life ended on the stage of Sunderland Empire (which is about 13 miles or so from where I live at the moment).

This painting is already spoken for, and it was painted over 3 days with acrylics on a 50x60cm canvas.  I put a number of progress images on my facebook account, as people have asked me if I use stencils for my paintings.... my reply (while usually contains many swear words) basically comes down to 'no' as that would not to me be 'art' but more like colouring in you do as a kid.

Sometimes I block out a piece digitally and then use this as a reference when painting, other times I freehand it. In this one for example my mind wandered during the 1st session and I badly screwed up one of the eyes which I spent most of today putting right.  The hardest trick if I am 100% honest is making sure the edge lines are correct and also as sharp as can be....  This can be very tricky on a canvas these sizes that you cannot lean on.

For anyone curious the workflow I used in the time lapse of the Robin Williams painting is about the same as I use now, although I do vary it depending on how I feel and what the subject matter is, but the main constant is I paint them...by hand....  I usually paint alone in my art room in total silence... I have tried putting music on but it distracts me i find. I paint best in mid afternoon and evening...mornings are a no go as my hands are usually shaking from the massive load of coffee I need to wake up lol.  Obviously this isnt good when you are trying to keep clean sharp lines.
Posted by Wayne Robson at 09:44 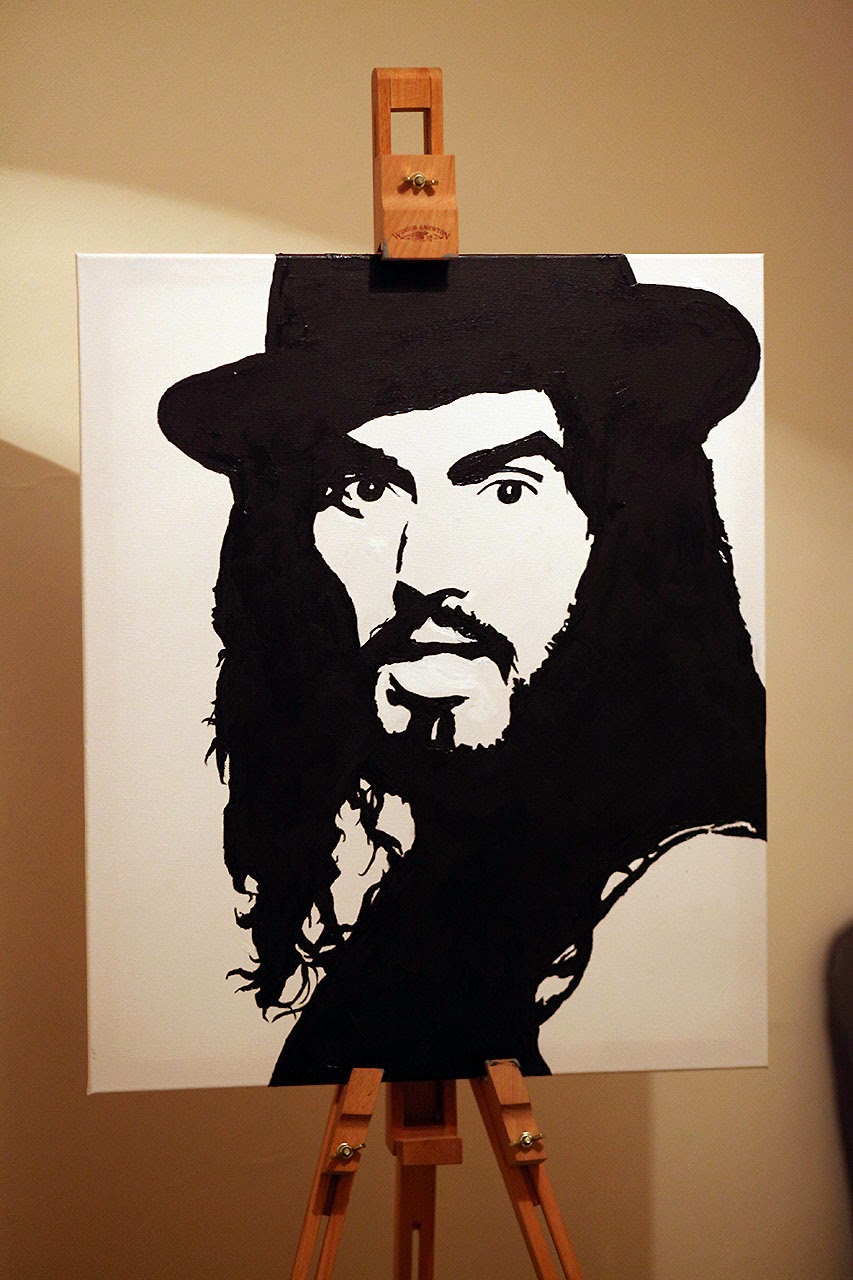 By now you may have worked out unless you have brain damage that my paintings are following  themes.  My personal heroes cover most of them (such as the obvious ones like the painting of Harry Houdini, My dad, Hunter S Thompson, Robin Williams and Michelangelo (hence why I did the Pieta ;) )

So in what I fully admit is a 100% cynical effort, purely intended to both raise enough money for my 2 kids for some decent Christmas prezzies (This buggers going Ebay), and also to raise the profile of my painting somewhat I decided to add Russel Brand to this series.

The reason for 'doing him' apart from the obvious one that he's rather in the news of late (plus I figured with attempted 'character assassination' stuff in a certain newspaper, that maybe he might be due to something that's not bad news), is that I have 100% respect for what he is trying to do outside of his comedy.  People who truly try with all their being to change things always end up making themselves targets. History has taught us that much.

I'd urge you to give his YouTube series 'The Trews' a listen and maybe realize that there does against all expectation by certain types in the establishment seems to be a brain in his head capable of quite interesting thought. ;)

So while according to the sun newspaper I am allegedly one of the few people who find him both funny and not a total tosspot, This painting is included due to his recent attempts to change the way the world works, the way people think about things and maybe he helps shake things (and people) up a bit.

So anyway now onto the obligatory sales pitch  as some point tomorrow this is going on eBay so I can buy an extra prezzy for my kids this xmas.

Do you hate him with a passion normally reserved for warring nations?

Are you a female (or male?) who would like to have Russel Brand in your bedroom , dining room or even barely functional outside toilet?

Or do you truley want to give him a damn good slap/ shout at him in a nonsensical way?

Would you like to own a painting by a mad Geordie bastard who worked at some rather interesting firms over the years?  (No?...well... cant say I blame you really lol.)

Well now with Wayne Robson's Blatant Cynical Xmas Cash Grab you can do any of these things and more!  So wether you wish to grind you crotch area into the painting like a demented dog in heat, or simply set fire to it... it's all yours if you win the ebay auction!
Perfect also for single blokes to tie to their head to improve their chances with drunken females in ngihtclubs.  Also can be used to scare small children and furry mammals.  At 60cm x 50cm its a perfect size for all your russel brand needs.

All proceeds go to the 'Waynes Fucking broke and needs to buy his kids an Xmas Present' charity ;)