Jesus H Christ it's been an intense 17 hours.... I normally try to keep swearing to a minimum in the 1st paragraph of my blogs, but it is warranted in this case. yesterday started a bit weird with 8-10 inches of snow falling in less than a few hours...odder still when it had been 25 degrees C the day before! About 9pm last night we had a massive power surge, while my new pc was behind no less than 2 industrial level power surge protectors and were fine, my wife's were not..... Suddenly her PC 'No Worky' so I dropped what I was doing to try and work out the problem (i.e. what was fried) and see if I could replace it with bits from an old single core to get her up and running. The reason for this is rather simple..if I did not them my wife's moaning on about it would stop me from working and make me want to kill her inside of 20 mins lol :)

So there I am with two PC's in bits in my work room with her trying to hand me parts as I asked for them when BANG...power cut!! So I'm sitting there in a small room completely in the dark surrounded by 2 PC's in a state of total disassemble with no torch...no candles a hand...no light. As both our kids are terrified of the dark we had a bit of a time limit and had to make zero noise as if they had woken up....we were sort of in trouble as the only door out of my work room was blocked by computer cases.

BBC link to the new about the epic powercut that hit 30,000 Homes.

You know those times if you're a PC builder that you say 'Hey I could put a pc together in the dark!!'? Well that's what I had to do...after moving the cases out of the way, wife hunted (and found!) a tiny tea light candle. I then sat trying to put the dam thing together in the dark so we had enough room to get out of the tiny work room lol. Gospel truth and no word of a lie. I would not recommend it to anyone... [{latest edit}: Wife just switched on the pc I built in candle light and guess what...a miracle it works...*awesomeness powerup +100* lol]

All electric was down until about 6.30pm tonight...so cue a day with very bored kids with no TV, no games no hot meals, no hot drinks...and no coffee... The lack of coffee game me a caffeine headache from hell that is only just subsiding after 6 back to back strong coffees lol.

Matte Doodle: 'The Church of the Holy Chasm' 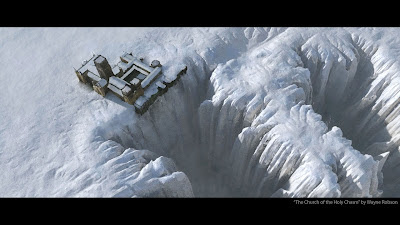 A quick doodle I did at 3am this morning. This is intended as a static matte using 3d elements and more traditional matte painting techniques. The shot would show a group of people walking towards the temple in searhc of what lies at the bottom of the chasm... thats if I ever finished it...which I probably wont.

Also originally if it had not have been 3am when I started this I was going to add a more futuristic cathedral / temple.... but as I had the Durham cathedral model knocking about for MOD302 it seemed a shame not to use it.
Posted by Wayne Robson at 10:25