I've had this knocking around for a while and as Modo have started the human body project I thought it as good a time as any to share this for reference purposes to you all.  I've put a 720p Turntable up as well as an OBJ, and FBX and a Modo LXO scene file.  Hopefully it'll be of use to some of you.  Now this is NOT UV mapped (as I have to leave some stuff for you all to do yourselves),  This is base poly modelling only

I also would have also uploaded the 3Ds Max scene file but the rigging I did back then is bloody shocking! :)  Once I can track them down on my backups I'll also be uploading a high resolution scan I did of a human skull and one or two alternative human skeleton models of mine.

These aren't to be used for any commercial use....


I just got word on twitter today that the review I was asked to do for 3D World magazine of 3Ds Max 2014 is in the issue just out.  I made sure this is a balanced review as possible and covers it from angles of everything from Film, Games, arch vis and advertising.   Give it a read and see if you agree.
Posted by Wayne Robson at 11:56

I spent last night finishing this guy off from a month of two back in Mudbox and then trying to replicate my usual 3Ds Max scene file and shader set up in Modo.  I managed it pretty easily although I do want to add a bit more subsurface to the shader setup next time I use it.  Modo runs on my Macbook better than Maya does, As 3Ds max doesn't run naively on a mac I thought I'd use Modo on it as it as its always nice to expand your skill set.

On other news I'm on re-adding some features I added to MudWalker while I was working at screen scene for the next release.  So there will be a release for Mudbox 2014 soon (ish), if I have time I may add the 1st mac version as well.  It will have one feature that no one else has that was always intended to be included but couldn't as it was impossible to test at the time.  Suddenly it will make the whole 'one click' workflow thing make a whole lot more sense.  I fully expect everyone and his dog to then rip the idea off wholesale lol.


I decided to do a little kit bashing in Modo for half an hour just to see what would pop out with the default install.  Nothing amazing or serious.....  But I do like Modo for this sort of thing and its poly tool set.  Ideally I'd like to be using my own kit bash set rather than a default install one. 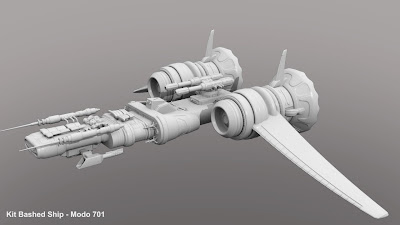