Thoughts on Opinions of all 3d Female Models

As you can see above I'm currently working on a type of model that is a rare thing for me, a female sculpt.  (Don't worry she'll be wearing something soon enough) .  There's a reason I don't usually do them, female sculpts that is that I figured was perfect to cover in a blog.

Now a female 3d model suffers from something that just about no other 3de subject matter does.... the attraction of the viewer, what he (if a straight male) finds attractive, unattractive and pleasing not just to his eye but in some cases to his groin.  How many times for example have you seen crits on female sculpts that often descend into 'I like bigger breasts', or ' I don't like the pointy chin', etc etc?  I'm not referring to everyone here, but there are a lot who treat feamle 3d models like a virtual edition of playboy.

When was the last time anyone said 'I don't like this orc as he needs a bigger penis'? Or 'You know I really prefer my orcs to be more female looking and with larger pectorals and a firmer bum'?  But somehow treating a female 3d model as almost like a virtual beauty parade is somehow deemed acceptable.  Is it as it is still a male dominated profession? (judging by the views on my YouTube videos alone 95% are males).

We don't see females in our industry complain  that a male sculptures knob is too small or he is not toned enough.   (Although that would maybe make a point far better than this article ever can.)

But for males it seems to be just natural.  THIS is the reason I hate doing a female model as it is less about the model itself and more about what the male looking at it finds attractive or aesthetically pleasing.
So why am I doing it? Simply as if I do not included one once in a while people assume I cannot do them.  It may seem strange that while my work often skirts the daemons from the 7th level of hell that I don't agree with objectifying women, or treating them purely as objects for visual gratification.  So  while this will 'say' something artistically once complete, it may not be what you would expect.

So yes I do have a line that I do not cross, I expect some to disagree with that, but hey it'd be a boring world if we all agreed.  But I always stand by my principles whether others agree with me or not.   No point having principles if they are the same as everyone else.  So yes I would like to see less objectifying of women in 3d models and see them treated exactly the same as a male model or a one of a orc riding a space goat from mars.  Its all just polygons.... or we could just all moan about breast sizes and continue as is lol.
Posted by Wayne Robson at 11:08

As I've been quietly working away on stuff for my next reel, I thought I'd show a few images of stuff that's both going to make it, and stuff that isn't.  Although I won't make a final decision on anything until I've got everything rendered out, both that I'll use and not use.

Although I am now after 3 weeks of rendering stuff out getting very sick of seeing my models go round and around lol.   Now usually this is the point that I start getting bored and do crazy stuff that people don't usually put in their demo reels, like the intro 'profile' stuff on the old Autodesk masters reel, or the hand sculpted environment stuff on the last one.  its anyone's guess if I will keep it sane and sober or start doing off the wall stuff lol. 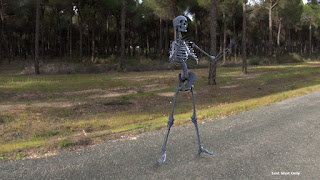 Wish I could lose weight...but not this much.


Although judging by my latest work in progress I may well be starting  to edge towards the latter. (yes he will be in a ballet pose in the reel lol).  he actualy was at one point going to be my version of 'Mr Hyde' but thought 'hey ya know what? I'm always doing scary shit, so lets try something a bit less scary this time' lol.   Although a brute in a ballet tutu may still be its own special kind of scary on  several levels actually. 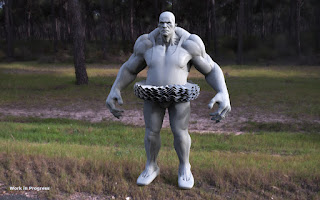 Go on laugh in his face, I dare ya lol

There is of course time for me to trash the whole damn lot and start over (it wouldn't be the first time I did that).  I'm trying to make sure  for once I do not rush anything so nothing shown here is 100% done with the exception of the cathedral.
Posted by Wayne Robson at 12:35