ReDucto and MudWalker X Have landed!

I don't make my apps and plug-ins available very often, but when I do people do seem to rather like them.  Back in early 2011 I stopped making everything available, lack of time to make them available and quash any remaining bugs that I could personally live with (but others would not) meant that everything stopped.  I pulled all remaining releases after the splash the initial version of MudWalker had made back in the day, and the even bigger splash the vector displacement shader for mental ray made.  As I explained back then it got to the stage where I was spending all my time answering tech support emails for what were free things I'd put out.  I write these things for me and I release things as either I have superseded them in my pipeline with another version or simply as a gift.  But in truth it's a side effect of making things for me that I personally need use of.  Nothing more.

Now as I did not get into art to be a tech support guy and want to remain being in art for art, releasing these means I cannot in all good conscience sell them.  The way I see it if your selling an app or plug-in you have to be prepared to act as tech support and give up a large chunk of your life.  Hence both MudWalker X and ReDucto are free to everyone with one small stipulation...no emails begging for tech support (unless you're a large firm), no emails or tweets begging for features to be added...nothing...nada...ziltch.  Any emails will get deleted unless you're a huge firm and prepared to pay for any changes or tech support.

ReDucto's 3d parts kit workflow is unique... there is currently nothing that does this even as remotely as stable or as easily (let alone fast...let's not forget that!).  The main ReDucto polygon reduction algorithm is unique and something I came up with myself years ago. no other app has this algorithm as I own it, I came up with it, I made it.  It gives superb results that are far and away better than everyone else's version of the simple quadratic collapse algorithm used by 90% of the industry.
There is so much more that's its impossible to cover in a single blog post.  back when MudWalker 1st landed years back it was the very 1st of its kind that PC users could actually use... It made a big splash and saw as a result a shit load of clones.  I still find it ironic that it had more app support in its 1st week than anything similar had in years.  This release dumps a lot of the old stuff and concentrates on newer features. (although I had made it easy to people to activate or deactivate the old features if they want them.)

It contains its own super fast polygon reduction algorithm that is totally different and totally separate from ReDucto, and probably the one feature I use more than anything the ability to jump all meshes in a scene to their highest or lowest subD level via a simple hot key.  The extras I'm sticking in with both MudWalker X and ReDucto are worth a look alone.    But its free and you can't argue with that.


They are both released via by own development banner 'Psycho Core'. Now Psycho Core is a software firm that is rather unique. It does not sell you anything, it does not want your money or your loyalty...it wants nothing and hopefully gives everything in return.  Downloads for both will be made available later this week once the help files and vids are done.   If you meet me at any point you can buy me a beer....  or hire me whichever is harder lol
Posted by Wayne Robson at 03:59

I had a great time over in Vancouver and apart from no one being able to find the adapter for the Cintiq (which sort of put a downer on any serious live sculpting for my 6 hour session..shame as I was really rareing to go) everything went fine.  Some of those there near the end got a small preview of something I have been working on over on the software side of things that the rest of you will see some time this week.  There were a host of excellent speakers, some of who I missed due to trying to track down some tablets for a headache due to the bloody hotel only having 2 sachets of coffee in each room per day! (I have that before breakfast lol).  So cue on killer caffeine headache for a lot of us lol. 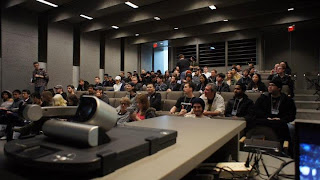 About 5 or 10 mins before my Lecture

I met a lot of great people I'd not met before this trip and had a excellent time, all be it that I spent most of my free time holed up in my hotel room working on 'something'.  In fact all but the last day the extent of Vancouver I saw was MacDonald's and  various star bucks on Robson street.

The journey back home was a nightmare as on the plane form Calgary to London I was stuck next to no less than 6 screaming babies.  So sleep on plane = zero. Also my new phone went arse up and I had to try something I'd never tried before and knew sod all about...rooting my phone in the cafe in Heathrow terminal 5 while hardly able to stand after nearly 30 hours awake at that point.  By some miracle I managed it... although last plane was late and I ended up seriously zombiefied by the time I got back home.

Still...it was worth it.