The idea behind 'Order 13' is that the world of digital art and expecially 3D is seen by outsiders to be simply 'pressing a few buttons' and requiring little to no skill at all on our part. Now as the guys and girls at the sharp end we know this is utter rubbish, But it inspired the whole concept behind 'Order 13'.

The concept is a simple one, for one day you forget all about the app or apps you are comfortable with and probably know inside out and have used for ages and instead pick its polar opposite you dont use and do a piece in that instead. Now as I use a combo of Mudbox and 3D Max the opposites of those would be Zbrush and Maya. The idea is to not only sort of say to people who think all we do is press buttons ' hey we do do more than just press smegging buttons all day', but also to stretch ourselves outside of our nice warm comfort zones just a little and make life more uncomfortable for us.

It is the artist that creates the art, not the application.

So I thought I'd start off by putting my money where my mouth was and picking up an app that I haven't used on a project or for a personal piece since 2008...Zbrush. To compound matters I set myself the task of recreating the head of the Lion from the KMBA productions logo and animation I did. So I spent an hour on it and here it is. It meant for this piece changing the way I was used to sculpting to get it to look the way I wanted. Obviously it sort of goes without saying that you wouldn't want to do this for a production peice lol. But if I dont say it then someone no doubt willl take it as that being what I actually meant, so sorry for stating the bleeding obvious. 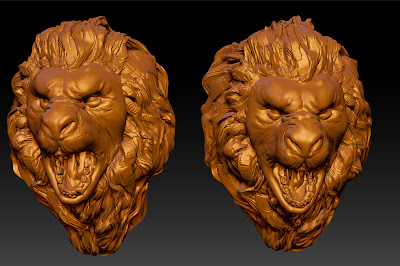 This does not mean I have changed apps...that is not the point of Order 13. I also realise judging on past times I've even mentioned zbrush that this is sort of taking a bit of a risk. As very small minority of the less glued together zb users seem to take a rather bizaar extreme exception to me even uttering the name lol. (I have had emails that'd make anyones hair curl over the years.....one day I'd love to publish the whole damn lot on a dedicated site. lol). But as I never tell anyone what apps they are allowed to use, you can guess what my view on other people attempting to tell me what to use or not use is. ;)

But I digress.... Which I admit I do have a habit of doing rather often. Give the idea behind 'Order 13' a go.... step outside that comfort zone and stretch ....or you could just forget all about it and stay in the confines of a nice comfortable place your in. To me, being an artist is never about being 'comfortable, but rather finding new and intersted ways to make myself uncomfortable and stretch myself. But granted thats not for everyone.
Posted by Wayne Robson at 10:16 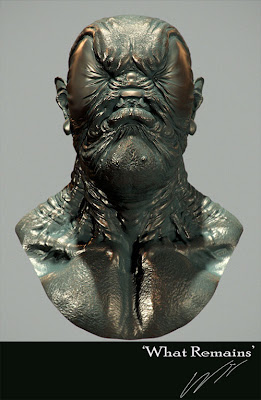 Another of my many partly done sculpts brought to some semblance of completion last night. Render took an absolute age with all those final gather bounces to help it look nice.

The name does have a reason and meaning but its sort of private and I only mention it is because if I don't then some bugger will ask why its called that. Its breaks teh old creature /monster rule of making sure it looks at least something like something living or known facially. It doesn't. (Which is one of the reasons I originally mothballed it.)
Posted by Wayne Robson at 14:19 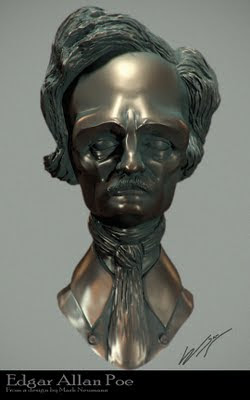 I started this sculpt back in about april this year and it got mothballed for no other reason than being too busy to finish it. So there poor old poe stood on my drive with no hair for months along with about 70 other partly done models from april and march.

Unlike the others (as I often produce far more than I ever finish when working just for something for me) a little voice said to finish him off. So I did. Maybe I should dig around and see what else I feel like finishing off at some point. I'd love to get this one 3d printed just for my own amusement and to stick on my desk. I've always had a soft spot for caricatures.

On a side note I finally offically handed over ownership of mudboxhub.com yesterday, so its no good sending me emails about it as I no longer run it. This along with stopping the free tutorials and dvd's has taken a fair old bit of stress off my shoulders.
Posted by Wayne Robson at 12:31