Few new images this time, the two above are assets I'm creating for the guys at HDRI Light studio for a upcoming demo they have to give.  Now the green guy is the character from the next episode of my series of shorts 'Monsters!' who is getting a little run out early for some facial MOCAP stuff for them to use to demo the HDRI lighting that comes out of HDRI light studio.  The facial mocap is done as usual in my app MASK.
In this case in one helluva hurry due to a very short deadline for these assets.   So the facial stuff consists of a few bits of face pulling, which is whats happening in the frame above (although he does look rather constipated)  lol.


While I was at it I found a few mins to stick a texture on this guy.  Originally he was going to be put on the back of the rhino with a old cane... but I realized he doesn't actually fit as a rhino is a wee bit too wide... that's why the rhino has a saddle and no rider BTW.

US Trailer - The Last Days on Mars

A fair few different shots in the US trailer.  Still not allowed to go into details about it yet.   I standby what we did with a tiny team on this. 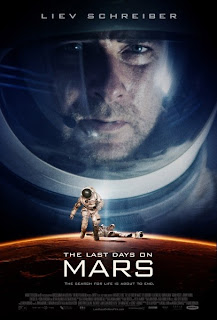