No I've not been slacking off..... here's the songs wrote and recorded so far for my crazy 'make an album in 14 days' challenge'

Thats nine songs in 7 days so far..... although I have a week left I only have a handful of evening to complete the as I will be away for a couple of days at some point next week. 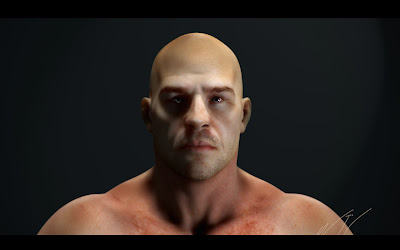 After the music stuff of the last few days... I figured it was time to post ssome actual art on my art blog lol.   Something I knocked out today for next time I need a male human model.

Above you can find a few songs of mine I've wrote last night and on Saturday night.  Some of you know my music predates my 3D stuff by a lot of years and in some ways is my 1st love creatively.  It's something I do just for me and not for 'coolness or glory', I do it because I enjoy it.  It has had a side effect or two though recently.  Firstly I was approached by a certain games firm who asked if a few of my songs could be used in an upcoming game or two they have in dev.  Which is odd as it means I am back to being a 'pro' musician after 20 years away from it.  It was never intended for that many people to hear it, but hey that's what music is supposed to be for I suppose.

But I've came up with a very crazy and probably incredibly stupid idea.  It may not surprise you to realise that I am not just a fast sculptor, I also have a pretty fast turnaround of my songs from initial idea to final master.  I try not to spend any longer than 1-2 evening on any one song or composition.  As just like my 3D I have had a fair bit of practice at it over the years and I'd have to be pretty stupid to have not naturally sped up in that time.
So my idea is this:  In the space of 14 days to record, mix and master a whole new album of songs of a professional quality.

I have only two simple rules for this:


This is a massively stupid idea in many ways and could well be doomed to failure.  But it's going to be fun attempting it.

My 'working' hours for doing this are between 7.30pm and 11pm at night only and I'm aiming for between 10 and 15 songs.  God alone knows what will pop out of my head, but I find it a great way to unplug from the day job of 3D as unlike 3D where people do 'expect' a certain quality from me, in music no bugger has a clue about me and my music and have no expectations.  Which is very liberating I have to admit.  I love the fact that people for once expect nothing quality wise as it is so much less stress.  I am already consigned to the fact that 90% of people won't like the music I make, but the point is it's a relaxation and enjoyment thing for me.

So... over the weekend I am already 3 songs in (although my favourite so far is 'The King of Life' BTW) so my end point for finishing all this is Saturday 31st of August.   Wish me luck... I'm going to need it...it makes a maximum available time for me to do all this 49hours with my kids jumping around at the same time lol!

[EDIT] I should point out something rather important.... this is NOT to 'prove' anything to myself or anyone sle, but has the most simple motivation of all...to see if it can be done [/EDIT]
Posted by Wayne Robson at 02:50