A Door for a Dracula

Note: I upped this by mistake a week or so back, and pulled it once I'd realised I'd got the broadcast date wrong, so apologies if you were one of the few who saw it before I took it down. 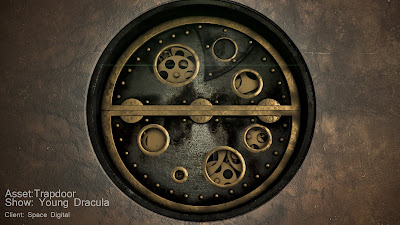 The asset as handed over ready for lighting

A few weeks back a last minute freelance job came in from the guys at Space Digital when they needed a asset super pronto with no existing design. It was for the kids TV series Young Dracula and they needed a trapdoor. After a bit of head scratching (and also knowing that worst case I could make a very simple iron manhole cover type thing, acted as a backup plan and gave me a bit more room on the concept.) So after a day of thinking about things and some rounding up of some inspiration and reference, I decided to go along with an idea of Matt's over at Space Digital and head in a slightly steam punk direction.

I didn't bother drawing any concept art as I had it in my head and this projects development time wasn't long enough that I was likely to forget it. So I made the basic door in 3dmax and a fully working clockwork system by importing some cog shapes from illustrator and then converting these into polys and extruding them. 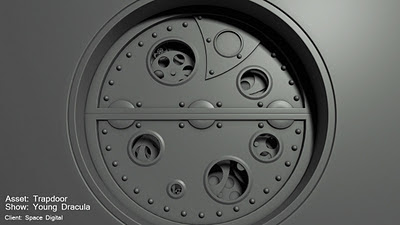 Texturing was aiming for one thing only..make it look nice and render fast using Renderman. This of course meant changing the whole scene over to Maya (as my max to Renderman plug-in I've been working on is not stable enough for production work). Then it was tweaking of lights and shaders and get it to the guys ASAP.

Sculpting and texturing the inside of the tube leading from beneath the trapdoor to the pit of lava was 'interesting' as texturing and sculpting inside of a tube with inverted normal's is never ever fun...not even a little bit lol.