I didn't want to rush this review of the Ricoh Theta S 360 camera, I wanted to give it three weeks of usage to provide a hopefully balanced review. It'd have been far too easy to have a knee jerk reaction.

The Theta S can do both 360 video and 360 stills...and before you ask, yes you can take exposures to do an on set HDRI (at a res of 5376 x2688). However the theta doesn't automatically do this for you, you need one of the third party apps out there. You also then have to combine these into you HDRI in Photoshop etc.

But really that's not that much hassle and a small price to pay really.  The trick is knowing how to set up your exposures to get enough headroom in 32 bits for a good HDRI.  But you'll have to figure that out yourself, as I'm not going to tell you those settings.

The quality of the resulting 360 images is pretty damn good, and with a f2 lens it's also good in low light. Although it obviously will never be as good as a full frame sensor camera.  It records video at 1080p, which might sound awesome until you realise that this is for the full spherical shot. Then suddenly once viewed as such (or even in a VR headset) you notice the quality is not that brilliant. Ideally at least 4K or even 8k would been needed for a really nice sharp video.

There are a few apps that can make life easier when using the theta. While the official Ricoh Theta S app for both IOS and android is great for normal use, it's as much use as a chocolate spacesuit if your intending to take HDRI’s.  So I'll provide a list of those here with my ratings from my own personal testing. Although a top tip when using any of these is to always connect to the ThetaS wifi BEFORE opening any of the apps. Otherwise they can crap out and drop connection.


Their blurb on the site describes it as such:

Lys is an ultra-fast GPU app that generates Radiance, Irradiance and Specular textures from panoramic, Sphere or 2d cube map cross source textures for use with HDR Image Based Lighting.
It can convert, manipulate and tweak your source images in real-time, generate Radiance, Irradiance and Specular textures on the fly and choose between Cosine weighted, GGX and Gaussian specular terms with fully automated BRDF convolved MIP maps with user configurable varying Specular Power or Roughness, Lys can help give you the tools and functionality that you need to ensure that your project’s HDR Image based lighting pipeline is the best that it can be.

I’d also add that of extra special interest is the ability to rotate in X, Y and Z the panoramic HDRI to align it just as you wish.  I’d urge you to give it a go as it’s a very handy tool for manipulating and previewing Theta HDRI’s .

The Theta does a pretty decent job of removing itself from all photos, videos less so but its not too bad really. The theta s is in my opinion perfect for on set HDRI capture, and also for use as a witness cam.  It's small enough to be unobtrusive, and a lot faster to use than a full DSLR and nodal ninja setup. I can get all exposures needed in about 44 seconds, although I have a feeling I can speed this up further. If you're into programming they have also made the SDK available, in fact I have a feeling as current triggering apps are also downloading the images to your phone between shots, that an app that didn't do this would significantly speed this process up.


Right now I use 3 apps on my andriod phone for both triggering and also taking the images needed for a good HDRI.  If you’v never taken images for use as a HDRI light probe I do urge you to research the subject properly. There is nothing worse than a HDRI that doesn't have enough range to be useful.

Not that broad in scope but what it does, it does well. I’d recommend getting that one as standard. They do a IOS version as well for those of you on the Apple side of the blanket.

Plus points:
Ricoh made it so it works pretty flawlessly with the Theta S.
Bad points:
You can't natively take the images required for HDRI’s easily

Allows you to generate 360 HR images...or rather more accurately take the shots that you can then make into a HDRI.  ONly draw back is no control over how many images (it takes 3 and that is not enough in my opinion for serious usage, although still hold up fine for personal work in most cases)

Plus points
If you're in a real god damned hurry it only takes seconds to take the 3 images.
Bad points:
it only has 3 images you can then use, and zero control over any settings, so your working on trust those settings are correct.

Theta S HDR by M-Apps
This allows far more control, all be it in not the world's most attractive UI. But to be blunt I’m not interested in how pretty an app such as this works, only that it works and works well. Which it does.
It allows very fine control over both the amount of images and all settings used in each shot taken.  I’ve managed to get some fantastic nighttime HDRI’s out of it. Although to be fair that's also down to the fact I know my way both around cameras and taking HDRI’s very well also.

Plus points:
very fine level of control,, so capable of producing excellent results
Bad points:
none... apart from it can take about 45 seconds to take a full wide ranging set of images. Which to be honest isn't too damn bad! (It’d still take far longer with a DSLR / Nodal ninja / fisheye setup) 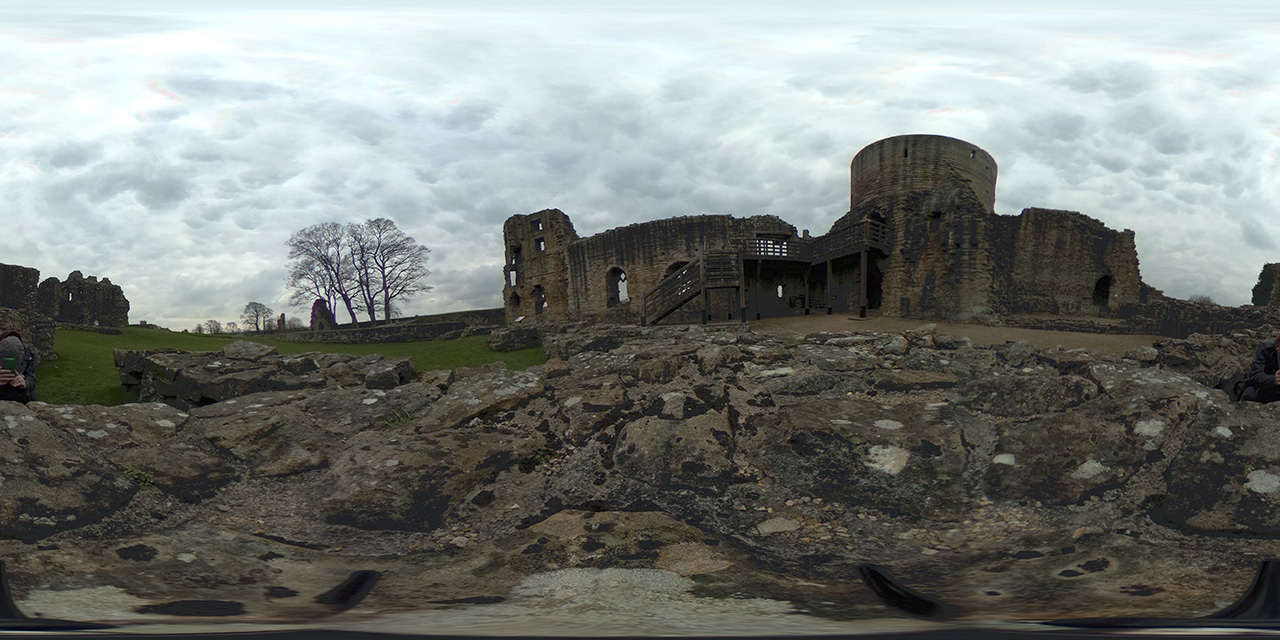 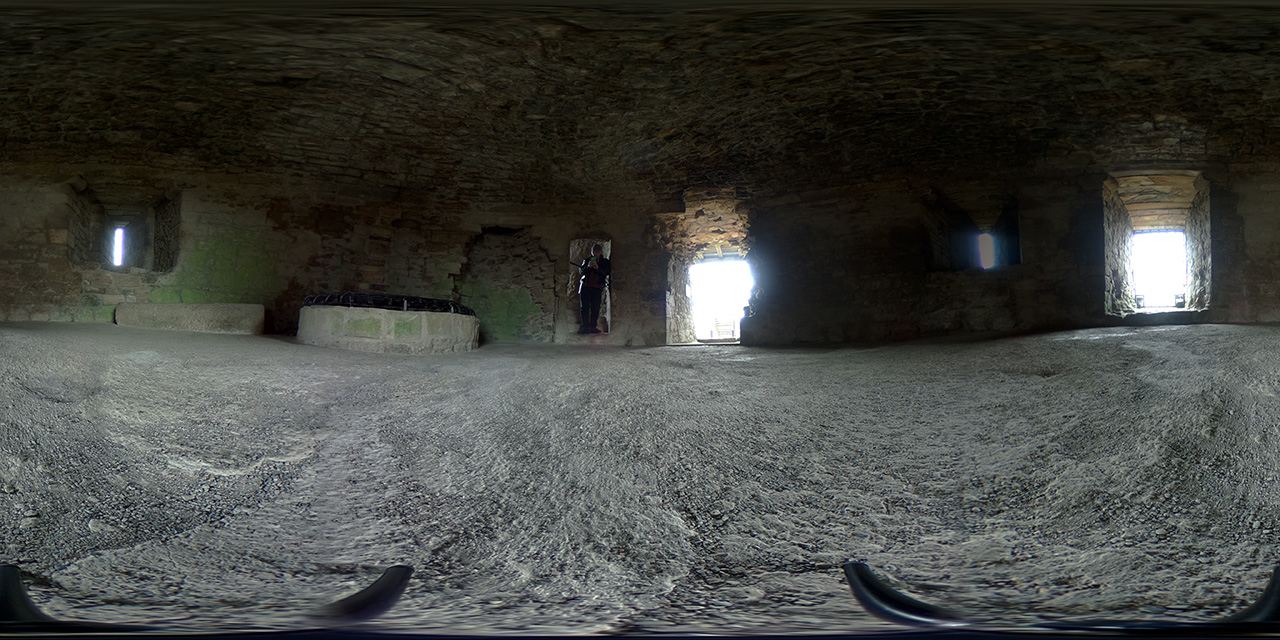 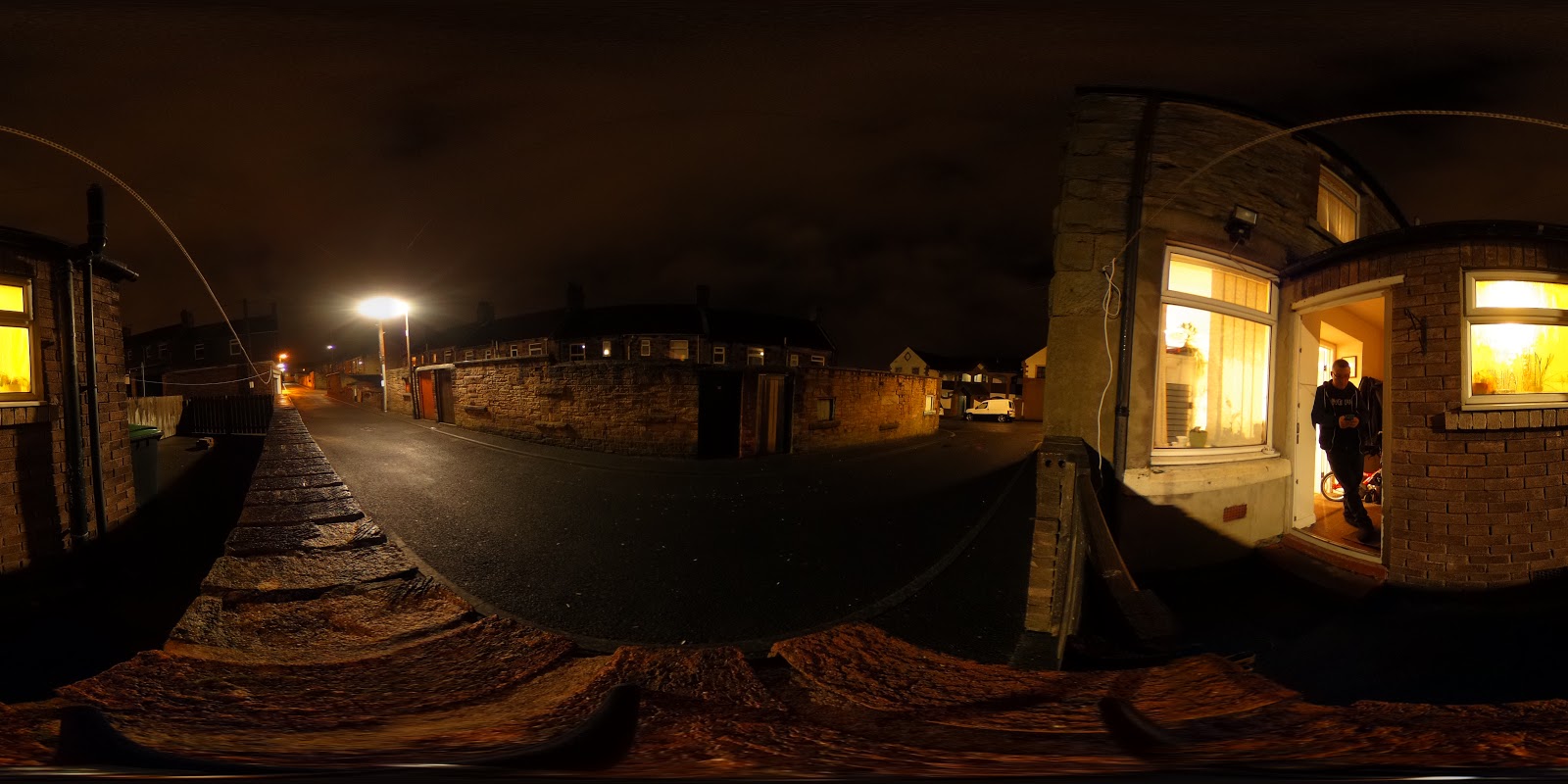 Yes that is me taking the test images outside the kitchen door at home.


These are just personal videos usually taken while out with my kids, they really weren't meant for public consumption as such.  But as they serve the purpose pretty well I’ll stick a couple here.


An amazingly useful bit of kit for use if you want to take full 360 panoramic HDRI light probes, or wish to just arse around taking 360 video. The video quality isn't there yet and my bet is to get the quality we are used to seeing in a non VR way these days, it’ll need to be above 4k.  But for about £300 you can't really complain. Yep you’ll need a tripod for taking good HDRI’s but it’s still far faster for on set usage than a DSLR / Nodal Ninja / Fisheye combo
Posted by Wayne Robson at 11:57